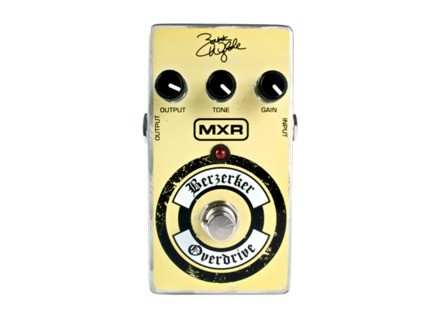 In boost mode it's perfect on the lead remains law, it does not add too much coloring and especially the food does not signal, you can thicken the sound by adjusting the tone and gain, because I have a TS9 I would say that the original grain is less vintage and more especially suited to modern rock, with a TS9 High Gain amp so I generally find that it does not sound terrible ... (Mesa, Randall, Diezel, Engl .... ) with the MXR as is more transparent than that respects sound of the amp is on the edge of a clean boost cranked
Otherwise Pure Drive mode I would say that there is not much gain without a real TS9 is too feeble to stand crunch is not shy ... and without character suddenly was not printing a natural drive a tube amp pushed

This is a pedal that is made by transplanting the MXR BOSS SD1 was before the Zakk Wylde pedal, pedal also praised by Petrucci which was also used before replacing the TS9DX Keeley ...
I would like Boost in a modern registry is the right cam after pure drive drop, otherwise I'm not a fan of Zakk Wylde against by his gear is heavy

You have a choice:

- Whether it is used as one overdrive, and the sound is very close to the famous green pedal (a little lighter).
- Either as a boost distortion plugged into a Marshall and it is the top.

3 knobs are effective and play their role perfectly, nothing to say.

The sound is very clear, once engaged, we know that there is something more, an overdose of gain, but does not color the sound!
In comparison to overdrive Ibanez Jemini or Visual Sound Jekyll & Hyde, there is no photo.

It was an overdose of gain, much appreciated during a visit solo, which can pass over the mix, in short very strong!

I use it with my Gibson Explorer and my PRS CE24 on a Marshall JCM800 or Marshall Class 5 at home and there's no denying she has the sound!

Some prefer the old model (apparently both have identical components), but I think the look of it really nice!

It does its job and that is what I wanted!

I would do without hesitation that choice!