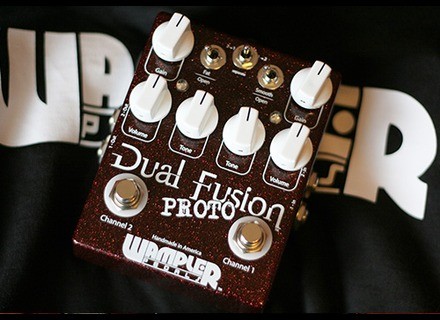 All user reviews for the Wampler Pedals Dual Fusion

sydn's review (This content has been automatically translated from French)

This pedal containing two pedals in one, we can change the order of the chain. Eg the paisley (denoted "1 - vintage" pedal) in the first pedal and euphoria (denoted "2 - modern") in 2nd, or vice versa. Or separated. This is very nice, because it does change the sound, but it is also a failure. Because if you want a splitter to another formula, disconnect and reconnect its Jacks in the right input and output good. A bit complicated to explain like this, but know that this concert is impractical, and right piece totally impossible.
Another annoying thing: no location stack. It necessarily need a transformer. And son, it's boring.
Too bad, but it was his only real faults.

I was very impressed!
I do not know the original pedals, but I've read that Wampler had studied electronics to improve the compatibility of the two sounds.
Indeed, the pedal provides a vintage sound, more dedicated to the crunch, and a modern sound, which makes for a more saturated and compressed overdrive, but still quite round and clean.
The mixture is just two démenciel, dynamics, and the sustain is huge, even with little gain! The signal is lightly browned (this is the modern fashion colors a tad, the other not), but very beautiful, very "fusion" in fact, I love it!
In rhythmic, dynamic allows for a lot of groove, and solo, the sound responds perfectly to the subtleties of the game and is very clean, it's impressive.

I use it for 4 months, especially with a strat, and it's just fantastic range sound you can have with the sound quality and sustain even with an almost clean sound! Happiness!
The guitar even easier to play, it sounds easy, it is not cheap but worth it.
It is not dedicated to extreme music, it is made for the jazz-rock fusion. Personally, I even used to recorded a solo big rock, and well it did without problem!
If it was not the lack of practice for connectivity, it would have been perfect. But hey, I guess if wampler has not simplified this aspect is that they could not do otherwise!