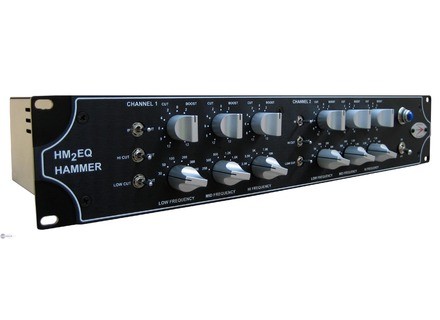 nemery's review (This content has been automatically translated from French)

Can no longer simple.
A button cut / boost + / - 12db assigned to a button notched to select the frequency range from 6 positions.
A Low-cut switch, switch, hi-cut and not a switch bypass channel.

Used for the stereo as the two-channel mono.

The results were better after a good half-hour of heating.

Is where everything happens.
This machine is very very musical.
It is not at all, here, an EQ to make accurate correction.
Besides, there is no selection of the type of correction (shelve / bell / Q value etc. ...).

This is the EQ to shape, embellish the envelope of a sound, a sub-group, an entire mix ...
It provides for the holding and strength in severe / low midrange, detail and clarity to the midrange as well as air and life in the treble.

It is very flexible and very well cash the "strong" correction but still very musical and never aggressive. I happened to apply the +9 db @ 15kHz on a mix without causing any aggression, I would say that it sounded softer, yet more bright and airy bcp ... And it also works in the bass, it remains "tight" and never overflows. In the midrange is a bit trickier, but it works very well, both in cut than boost ...

I never felt the need to use the Hi-cut for now but we'll see in the future.

I use since November 2010, very often pasted directly behind my stereo preamp Pacifica from the same brand at the sound (besides, I highly recommend this couple!).

That's really what I was looking for the type of hardware EQ: a machine colorful musical with a character that could bring the "magic" to my analog mix, which improved my tracks from the sound etc. ...

I often worked the EQ plug-in software with paravant, more for the "correction" when mixing ... but I could hear Pultec type machines in hardware such as Summit or other parametric EQ like at Millennia. Two very good machines that do not have the same things the Hammer. The summit is also colorful, but does not work the same way and has only two bands. The Millennia is more complete but also more trensparant.

In short, we are in the upper upscale anyway, so the taste and color ... It is only "type" of use and colors.

What I like most:
Sound.
The side "it's cool when I do that, then that too, oh and that too, and then this ..."
The possibility to make stereo
Simplicity

What I like least:
the fact that there did not bypass by independent band EQ. It would be very useful for controller easier corrections ... but it's history to find a weak point.
The ratio Q / P is correct, nothing more. I bought used 1500 euro So for my part, I'm happy with the price at which I could have it ... but on the new home market, the price of what a good EQ.
I would do without hesitation that choice, by the way I do not sell any time soon ...


16 of 16 people found this review helpful