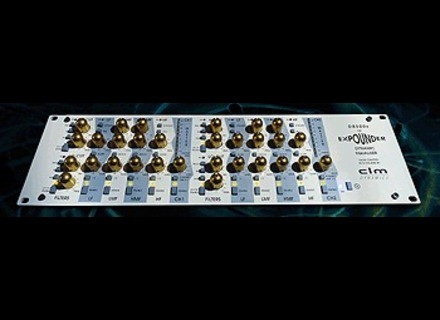 CLM Dynamics DB500S Expounder
5
The CLM Dynamics DB500S Expounder is a stereo equalizer that is incredibly in depth. Each of the two channels has four bands, with a lot flexibility to work with. It's an analog equalizer that has a number of unique features to it. I'm not sure on the connection types since the one I used was at a studio where it was hooked into the patchbay. It is rack mountable, but it's pretty bulky and takes up about four rack spaces in a traditional type of rack casing.

The configuration of the CLM Dynamics DB500S Expounder is quite in depth, as it's got a lot of things going on here that you might not necessarily find on a more traditional equalizer, and this include dynamic filtering. I can't remember all of what it has to offer from the top of my head, as the one I've used was at a studio where I was doing a freelance session for a week and haven't been back since. However, it definitely took me a little while to get used to using it, and I'd like to get back in there and use it some more. A manual would definitely be a good idea for new users, but I haven't seen one so I can't speak about it from experience.

The tone of the CLM Dynamics DB500S Expounder is superbly clean as this unit really sounds great in my opinion. The EQ in itself is extremely flexible and is capable of being used in just about any situation. However, when you add the dynamic filtering and other options into the mix, it really makes it capable of a lot more than a traditional parameter EQ. This thing is built for precision, and that's exactly what you'll get here.

I've only ever seen one of the CLM Dynamics DB500S Expounder, and of course it was the one that I've used. It does seem kind of like an esoteric piece of gear, but if you learn how to use it, it can definitely be of use to anyone looking to get in depth with their EQ. If you look at this as a traditional EQ (which it isn't), then the price might seem like a bit much, but considering it's versatility it's probably priced about right. If you're looking for a unique piece of outboard gear for your professional studio and/or are looking for a chance of pace from your other EQ's, the CLM Dynamics Expounder is definitely worth considering.
Did you find this review helpful?yesno
»