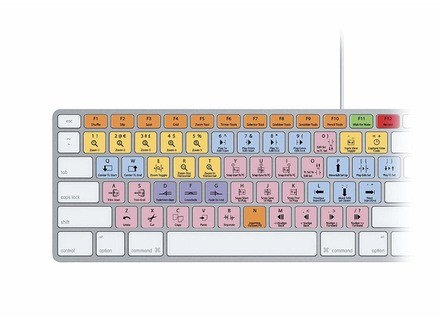 Apple Pro keyboard
5
The Apple Pro Keyboard is a wired keyboard controller for Apple computers. This isn't the newest incarnation of the Apple keyboard, as there is now a wireless version. We have the Apple Pro Keyboard in most of the rooms at the studio complex that I work at, as it's of course meant to be used with Apple desktop computers. I used to have one of these at my home studio as well when I was using an Apple G4 desktop computer, but now have a Mac Book Pro laptop so I don't have it anymore. The Apple Pro Keyboard has everything you need in a keyboard for your Apple computer, as it has all the proper functions, and both looks and feels good. It's easy to type on as everything is spaced out enough while it still has all the commands needed. Those who work on Apple computers will know that a major part of using it is for the keyboard shortcuts, so having a full keyboard like the Pro Keyboard will make this as easy as possible. Beyond this, there isn't much that you need to be aware of as it's a pretty basic keyboard overall. Since there is a wireless version of this keyboard, you can now get the Pro Keyboard for a pretty reasonable price. It's definitely a nice keyboard to have and does everything the wireless version will do, so if you're in need of a keyboard for a Mac and don't want to spend too much money, the Pro Keyboard will be the perfect option for you. I do believe that there is an older version of the Pro Keyboard as well, but the latest wired one should be available for a fairly reasonable price. If I ever have a need for a keyboard at home again, this will definitely be the model I go after...
Did you find this review helpful?yesno
»

Other Apple pC Keyboard and Mice