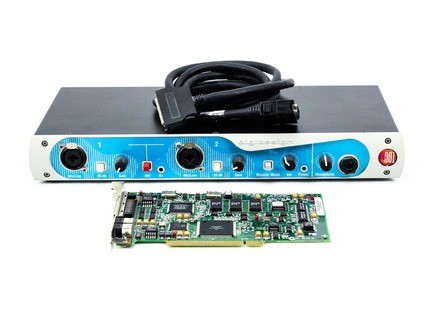 Digidesign Digi 001
4
The Digidesign Digi 001 is the original audio interface for Pro Tools. I don't know the year that this was first released, but it's definitely been a while now. The main reason that the Digi 001 is no longer really a viable option is because it's not Firewire or USB, but connects to your computer via a D-Sub and also has a serial port. You won't be able to use this with your lap top or newer computers for the most part, rendering the Digi 001 somewhat obsolete. Putting this aside and assuming that you've got a system that can support this, the Digi 001 isn't a bad interface.

The make up of the Digidesign Digi 001 has a good amount going on, as it has more connections than most are going to use. It's got two mic preamps that have dual XLR / 1/4" inputs and phantom power. Each has a gain knob and a pad at -25 db. There's also a headphone output in the front. In the back there are MIDI connections, 8 outputs including for your monitors, and six other 1/4" line inputs. As you can tell, it's a pretty complete interface considering it's size.

The sound of the preamps in the Digidesign Digi 001 aren't great but they'll get the job done for your small project or demo studio. I can't say that I'd use it for anything serious unless you had an external preamp, as they do sound quite digital and a bit harsh at times. This is going to be the case with most audio interface preamps, although the 002 and 003 definitely sound a bit better.

While certainly a bit outdated at this point, the Digidesign Digi 001 can still be a somewhat viable audio interface if you've got an older computer and are just looking for something to get ideas down. I'm not sure if it will run with the newest versions of Pro Tools, although I don't see why it wouldn't. The good news about the Digi 001 is that it is super super cheap if you can find a used one. It's only worth it though if you don't think you're going to be upgrading your demo studio any time soon...

Digidesign Digi 001
5
This is a great audio interface for your computer. The one problem is that Protools takes up too much DSP, as a result you won't always be able to get 24 tracks of audio.

Very easy to use. Learn Protools and you're gold .

Digidesign has always been known as the king of audio interfaces... with good reason. The Digi 001 uses the same quality inputs as found on thier $8000 Protools TDM System. You won't get a better audio interface for you computer under $1000!

Excellent gear. Don't know how I worked without it.

Digidesign Digi 001
5
Track count is not exactly 24 while using plugins.

You have to buy the full manual from Digidesign for 50 bucks! The tech support makes up for it though.

Perfect for a home studio.

The best sound quality on the market-- next to the Protools TDM and HD systems.

I don't know how I recorded before the Digi 001

Digidesign Digi 001
4
For some people this will have everything. For others this is the wrong choice. Pro Tools le has 32 tracks of audio. There is not parity between the mac and pc versions. The selection of plug ins for the pc version isn't nearly as good as on the mac side. The only soft synth which currently supports RTAS for windows is sample tank. Also, they use proprietary protocols for all of their stuff: no asio2 drivers or directsound drivers for the pc(they say they are working on it). No vst or dx plug ins. This soundcard really underperforms using their direct io to asio driver on the mac side as well(latency problems etc.). So, this card is good for two things: pro tools and logic audio(which supports direct i.o!). When using pro tools with the 001 its stable, effective, and a good value, I use a mac, and I think editing audio is far more intuitive with pt than other programs. However, no surround sound mixing in the LE version, and no beat detective either. The plug ins by mcdsp(filter bank, compressorbank, analog channel) and bombfactory(moogerfoogers, La2a, 1176, pultec, tel ray etc.) are the best. There are also cool plugs like serrato's pitch n' time, grm tools, metric halo's channel strip, and the wave's plug ins. While pro tools le doesn't support asio or vst there are wrappers allowing you to use asio plugs or rewire apps like reason(this is mac only). When pro tools 6.0 hits it will also be running with os 10 allowing dual cpu macs to run both processors. This has 8 channels analog i/o, 8 channels adat i/o, and 2 channels spdif i/o. I wish it had more adat i/o.

Installation is a headache, but the software only has 2 windows: mix and edit. There are many shortcuts and if youre experienced with daw software you shouldn't have to look at the manual that much. This is great audio software. Second rate midi software. Simple and intuitive.

Its sturdy. Support is good with an ever active forum of helpful participants: http://duc.digidesign.com Pro tools has always been the king when it come's to stability.

The score may seem low, but I think the converters are kind of dated now. They simply cannot compare with Lucid, Apogee, Rme and many others. Most pro's who care avbout their sound arent using 888's with their tdm rigs either. I don't know about the newer HD or 002 contervers though, they might be better. This is comparable to other products in its price range. It doesn't sound bad but Its not above average these days. Honestly for what I do, with all of my synths and stuff it works superbly and sounds great. But, if you want to really compare to the other kids on the block then yes there's better sounding hardware out there. However, there's nothing stopping you from hooking up better converters to the 8 channels of adat i/o.

Honestly, I like it but I wish digidesign would put more of what non le pro tools has into the 001. When you buy an hd system I think your paying for the dsp's, I don't understand why the always hobble their software ommitting feature's like surround mixing, beat detective or smpte. It doesn't make sense because competing host based(no extra dsps) products offer these type of feature's as well as better midi, and a better integration of vsti's. Also most other soundcards have better asio drivers, heck this only has direct i/o drivers for pc so you cannot use it with cubase, sonar, fruity loops, acid, vegas etc. This software rarely crashes though. Its great mixing and editing audio with it. Some of the plug ins are exclusive and high quality. I like it, but I doubt my next soundcard will be made by digidesign. I'd rather try something more vst friendly.

Originally posted on FutureProducers.com
Posted by: Unknown (January 0-, 2002)
Did you find this review helpful?yesno
»
Read the 21 user reviews on the Digidesign Digi 001 »