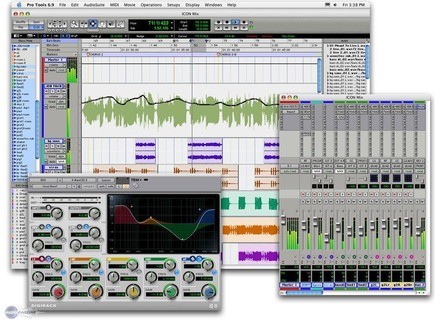 stiiiiiiive's review (This content has been automatically translated from French)

Digidesign Pro Tools 6
5
I use it with an Mbox and an iBook. The installation was childish. Everything is explained in the "quick start guide". Before a, I used version 5 on a PowerMac G4. This had caused me a little more problem, but we'll see over time.

For ProToolsLE, configuration is relatively gnrale lgre. For CT and other HD, I think a slightly thickens.

I have not traveled too the manual (electronic, not printed ...) because I knew the operation had had the chance to be formed on the job by a friend.

The compatibility mBox / iBook is complete with ProTools. One small snag dj signal ProTools does not boot if the hardware was not connected. Well, it has finally know. But against once it displays the message "hardware not DTECT please connect etc", you can not run it. We must raise with the Mbox connected to the dpart the procedure.

I have so far only 256 MB is oprationnel but just trs. I prconnise as much RAM as possible. Likewise, it is better to use a fast disk Reserved purpose, such as FW. Everyone knows that the machine is more dedicates less performance is succeptibles to be reached.

I use ProToolsLE since April 2003, the two versions together, and 6.4 since September 2004. Its strong point is the extreme ease as found in the work: I admit to not having REALLY tried something else, but once the main controls are mmorises, everything flows naturally. Another advantage: make your sessions in any major studio, ensuring compatibility.
Its weakness is indniablement litiste policy of the manufacturer. Monoclient the driver is the diffrence of his comrades and ASIO consors. So, no possibility to use the same time as Pro Tools and PureData JackAudio example. Too bad because of the fawn, we could route the bus ProTools in a patch of well-twisted PureData via Jack ...
Well, a is the weak point of Digidesign, you say. Yes, but also that of the Digidesign CoreAudio, the driver of ProTools (I believe it ...)

As for the software itself, I regret the ONLY prsence of pianoRoll to edit the MIDI squence. A small GridDrumEditor "MBM" t have any of the same welcome. But it is doing all the same. As this, note that in terms of MIDI, version 6.7 brings a lot of amliorations, especially at the tempo / timing / etc timeStrictch MIDI. but again, $ 75 is a bit dear Mr. Digidesign, especially when you just bought his Systm ...
One thing dernire also: trs quantize is not very intuitive. with a scale ranging from 0 200% 50 100% against a MPC or 0100% on a Kurzweil.

Ct of strengths, in addition to its ergonomics posse, the automation is a great asset of soft. For CRER, one can operate the faders or buttons for recording, or draw with graphical tools ... ALL is childish and can be automated for simple volumes and audio or MIDI parts to the Q deuzime para EQ to the left lane of the wafer 7 ... just tell him, and then described the automation.

I dj again the choice, and I admit freely that for the moment, there was no question of changing a winning team. I work effectively DSAN this environment, and is the main, I believe it. Sure, it's onreux and inflexible, but is of high quality Systm.
Did you find this review helpful?yesno
»

good's review (This content has been automatically translated from French)

Digidesign Pro Tools 6
3
The software installation can be problematic at times incomprehensible.

Some explanations are needed, I found pro tools with the previous version that came with the DIGI 001 and I must say that upgrading to 6.x has not been an easy task and it asks me yet huge problems that I can not solve.

In fact, updates and all the resulting costs are so expensive that I recommend ... Once you have stabilized your configuration, do not touch anything!
Currently, I find myself in the impossibility to upgrade to version 7 of the software unless I change my Mac and my Digi 001.

Once the configuration is "stabilized" is a good software.

I use it for many years with satisfaction with the results ... It allowed me to complete several projects CD and I am grateful ...(

The Digi 001 + Pro Tools is my first digital recording software ...

The weak point for the updates and all the resulting problems.

If I had to repeat such a purchase right now, I think I would rather see the side of competition.

I will therefore put 6 simply so good could do better.
Did you find this review helpful?yesno
»