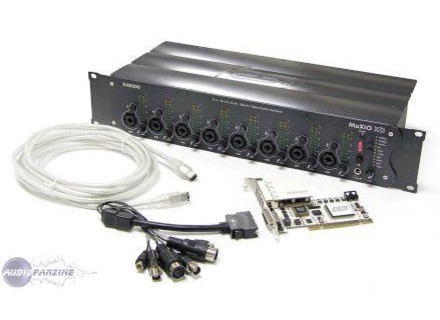 Jmdbasse38's review (This content has been automatically translated from French)

ESI MaXiO XD
5
Being able to change the configuration I have two cards now and then 16 entries MAXIO super no latency, it is that my microphone is nine (Grosse configuration, but only a 160GB drive) but enough is enough and sound dedicated exclusively to music.

Use recording with Cubase SL3 Group that is enough to do a good job.

We need to find the right slot installationle to install the PCI card, I gallery a little, because the documentation is in English, my PC crashed and did Démarais that in safe mode.
But with the tenacity it always happens for these purposes.
But once installed a treat

Everything is super stable, with a latency of 128, I do not have PB, I record a full battery 7 catches, two guitars, bass, plus witness the way in a taken over with Cubase SL3 even this Just to make quality recordings DEFOIS supperior that found in the trade.
Y mare to all recordings made with the same criteria we Assé to hear the same thing smoothed no life, finally it's my personal taste.

I use it for 2 months, with a PB on an entry will be set by the manufacturer (PB hardware warranty)
Yes I tried Mackie, Tascam, but for the empillage converters, preamp, I did not hesitate one second, it is true that investment is important but the result is there.
Today I have no regrets is a pleasure to work with this equipment
Did you find this review helpful?yesno
»

ASIO 2.0, which have proven
no prob stability
near-zero latency (less than 2millisecondes)
I will not record in multitrack so I know

I've had a year's monstrous

I tried a lot of things, even some friends in pro tools
there was no momentum and the definition
value for money, a little high, because the scalability of this product is blocked
but otherwise it's probably one of the best cards on the market with the best converters

I do not know if I'll re this choice because I like the gear changes
and ESI for the moment, stopped its activity
Did you find this review helpful?yesno
»

stable drivers with Cubase Studio 4, no update, and final Maj obsolete, 4ms latency, never more than 16 tracks eneregistrement (with adat and o1v), but no problems

installation without problems, panel config very boring, no inconsistency, Manual 6 pages in English and learn nothing

used for 2 years before I had an ESI ESP1010, an e mu 404, an ac 97 and sb auudigy, and also tested fireface800 edirol FA101, and echo the Fireface is gina.ça level conversion quality, I liked the meters in front, but it made the soul after 2 years, and even for the OCCAZ has 900th sucks, so it's expensive compared to the reliability (1600th new at the time). I had to sell the 3 / 4 of my stuff, and now I have a small m-audio, so no, I have saved with the experience of the 200th + and a private rm fireface800 components does stink .... and circuits are not Suck, and they are very expensive, even I had fun with this card, I 900th through the throat.
Did you find this review helpful?yesno
»