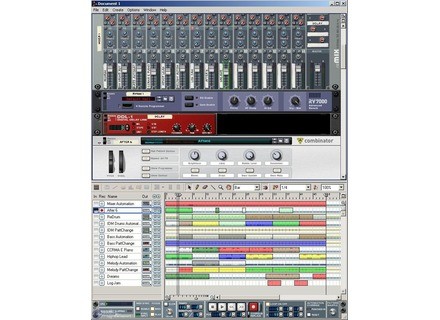 Reason Studios Reason 3.0
4
There weren't any compatibility issues when I was installing ReCycle.
The setup of ReCycle is confusing at first but it is easier if you understand waveforms and can identify where each beat is in the loop you are working with. The manual gets pretty hairy at times, it's easier to have somebody teach you how to use it. Fortunately that's how I learned how to use it. The basic functions of ReCycle are pretty easy to access. There isn't a lot of backtracking and changing settings involved with using the program.


The software is designed to isolate each element in a drum loop. If a drum loop is put into ReCycle, the program isolates each note and allows you to set the tempo to a BPM of your choice. These loops can then be used in programs like Logic and Reason. Overall, the program itself identifies 90% of the notes played in each loop. It is up to the user to isolate each note from there. It actually can get pretty tricky if you are dealing with a complex loop, but overall, it's not too difficult. It allows you to work with an astonishing number of samples and loops that would be difficult, if not impossible, to work with otherwise. There's isn't a whole lot of gear necessary to run this program, so the configuration doesn't really provide any issues that need to be dealt with. I've used this program for about six months. After a few days I was really good at doing loops, which was helpful.

I feel as though I would use this program more than I do. Considering I prefer to record live instruments, and I'm more of a ProTools guy anyway, this isn't really as helpful as I would have hoped. That being said, if processing drum loops and using them for your own compositions is your thing, this is a pretty great program. You'd probably having a difficult time without this or a similar program. I did not try any other models; the studio I work at purchased this. I think most software is overpriced, but compared to most audio programs this one isn't too bad. I personally wouldn't unless I needed to use Logic and drum loops more. Currently I have no use for it.

Reason Studios Reason 3.0
5
Propellerhead Reason 3.0 is a multi purpose electronic music sequencer. It works on its own for composing MIDI and virtual based instruments and also can be rewired into an audio sequencer like Pro Tools or Cubase. I was able to install Reason 3.0 easily on a number of different systems. It is easy to do as I've never had an compatibility issues. I don't have a manual for this software, but it could definitley come in handy as the program is pretty in depth.

I am currently running Reason 3.0 on a Mac Book Pro with a 2.2 Ghz Intel Core 2 Duo processor and 4 GB of RAM. I used to run it on a Hewlett Packard lap top with a 3.0 Ghz processor and 2 GB of RAM. I have been able to run this smoothly on both systems both as a stand alone and running it through Pro Tools LE via rewire. Reason 3.0 has run smoothly since I installed it.

I've been using Reason 3.0 for about three or four years. I use it for programming drum beats to use as a scratch track. I use it with an M-Audio Keystation 49e to play the virtual instrument in the sequencer. I mostly use the redrum and looper sections of this program, but the synthesizers also sound great. I usually put the drum beat back into Pro Tools and record acoustic instruments over it. Reason is a powerful piece of software with a lot of capabilities. I don't know what other software I would compare this to other than Apple Logic as they are somewhat similar. I like both programs for different reasons and both work great in a number of different situations. I love using Reason 3.0 and hope I am able to upgrade to Reason 4 as I have heard great things about it!
Did you find this review helpful?yesno
»

Reason Studios Reason 3.0
5
Features are great, there are tons you can do with Reason 3.0, love the combinator. For a software synth/sequencer, its a great program. The only thing I hate is that Reason no longer opens its own window when you open the program, requiring you to leave one project open at all times, or restart Reason.

Pretty easy to use, like many people, I believe directions and instructions are not for me, let me put my hands on it!

Sounds are kind of weak and thin, need to be mixed well in cubase/protools/nuendo etc. for a good sound. There is, however, with 3.0 a good selection of sounds.

Ha, well no crashes ever, so I guess its durable.

Originally posted on FutureProducers.com
Posted by: DeeBlaze33 ( 6-, 2005)
Did you find this review helpful?yesno
»

Reason Studios Reason 3.0
4
The features of this program are astonishing.There's a vast amount of potential coming from this program.I hope for a better sequencer,and more powerful sound ability from the program.In the end I'd like to see Propellerhead make this program into more than just a compositional tool.I'd like to be able to record directly into the program,and not have to export my audio for further processing.Propellerhead have made this program almost feel like a stand alone instrument rather than powerful workstation.

Although Reason 3.0 has a few bugs to work out,I would say that even getting earlier versions of this program may prove to be quite a feat to work around until you get alot of things down,such as :Wiring,Mastering,Mixing,Programming,Additive and Subtractive synthesis,and sampling.

Ah finally Reason 3.0,this program boasts on the new combinator and MClass Mastering Tools to improve it's sound.Overall,the patches in the subtractor and malstrom are fairly decent.I spend time tweaking factory sounds or creating my own.Scream 4 and the RV7000 give a big help in giving great sound quality.Overall the sound quality of this program has a weakness,the company themselves tell you to process your music outside of the program due to the program being merely a compositional device rather than a full out mixing mastering recording station.

The program is fairly stable,although users will swear this program will never crash on you that's untrue I've had this program crash on me several times,but I believe that's a bug issue at this point.

I like this program,I wouldn't say I love it quite yet however.Give Propellerhead a few years to make some changes and perhaps this will become even more of a competitor.

Originally posted on FutureProducers.com
Posted by: TheOracle ( 6-, 2005)
Did you find this review helpful?yesno
»
Read the 42 user reviews on the Reason Studios Reason 3.0 »

View all 22 discussions on Reason Studios Reason 3.0 »
Cookies help us improve performance, enhance user experience and deliver our services. By using our services, you agree to our use of cookies. Find out more.