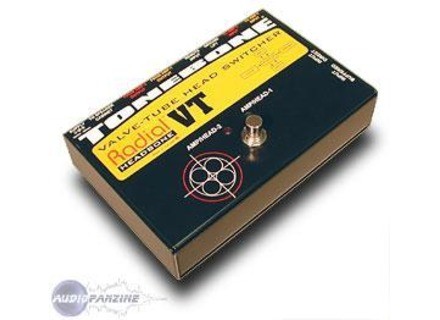 Headbone VT, Pedal/Controller from Radial Engineering in the Tonebone series.

All user reviews for the Radial Engineering Headbone VT

Radial Engineering Headbone VT
4
The easiest way to describe it as an A/B box after two amps to switch them into the same cab.
It's the size of two stomp boxes.
You have one speaker out, 2 1/4 inch amplifier inputs off the amps speaker tap, 2 audio inputs to the amp, also 1/4 inch, two inputs for the guitar (one buffered, the other not buffered), and a 1/4 inch jack for remote switching the box. And of course the jack for the power supply.
The hook-up for the first time, although explained well in the manual can be a bit overwhelming the first time.
It goes something like this....
Guitar plugged into the input of course, send two guitar cables two amp 1 and 2 respectively. Return from the amp's speaker out to the Headbone via speaker cables, and then one more speaker cable to the cab.
Now the box has a switch and that is great, the down side is that if you have it on your pedal board you will have to have long cable runs two the 2 amps, as well as long cable runs back from the amps and to the cab.
Having it on the backline and using the footswitch jack makes life a lot easier. The downside is that you have no indicato which amp is on. The best set-up I've found for this was when I used it with the programmable relay switches in the TC Electronic G-system. This way the amps were switched via preset and/or one of the assignable switches on the g-system.

The other thing I found a bit disconcerting was that when switching between vintage amps you were running "balls out". The transformer of the head that was running in the load did not sound too happy. I'm used to loaded head's transformers "singing" along when you actually can hear the head (for example when the cab is in another room, or using an iso cab, etc) but I've never come across it with no signal going through amps unless there was a ground loop issue. Which reminds me, as always vintage Marshalls are going to want to squeal like a bath room duck when they run on a common ground with a second amp, luckily the Headbone does have a ground lift.

cestode's review (This content has been automatically translated from French)

Radial Engineering Headbone VT
4
An original system that connects two tube amp heads on the same baffle.
Bought few months ago, at the time I found very little review of the product once I threw myself into the water.
For nothing very complex characteristics, 2 inputs and 2 outputs to connect the amp heads, an outlet to the cabinet, an input for a footswitch and 2 inputs for connecting the guitar (direct or buffered).
2 heads are adjusted on the impedance that matches the cabinet, everything is connected (in the manual found all useful information for wiring - however everything is in English) and voila. Usage is fairly simple.

My opinion on this system is very well built, the signal is perfectly preserved, the sound is not distorted. So nothing wrong with that.
I have however seen a slight delay to move from one head to another when you press the footswitch change is not instantaneous (it's still really light - force-I got used to and I ' instinctively anticipates that small defect without even realizing it - but at first it may be a bit confusing).
Another point to clarify in the manual explained that one should not plug effect in effects loops heads at the risk of having a few problems and it is therefore advisable to everything between the guitar and Headbone . The trouble is that I use a reverb and delay for one of my head, and putting them in this configuration entailed a yucky metallic echo that was my favorite cut my belongings. So I called the vendor for advice on this and he reassured me by telling me that I could put them in the loop of my amp without causing damage, and it should no longer be any worries. For more than a problem, I have this echo metal and everything works perfectly.

In summary, this is a good system that makes his job. I think that's the only system that offers the market to play with 2 heads of tube amps in a single cabinet which probably explains the price a bit high (250 to 300 euros nine) said that when you do not want of having to drag or two speakers that likes to have a sound that sort of a single speaker, this system is ideal.
The pros: the sound is not distorted, usage is simple.
The -: the little delay when switching from one head to another, and for the price we also regret the absence of the footswitch in the package.