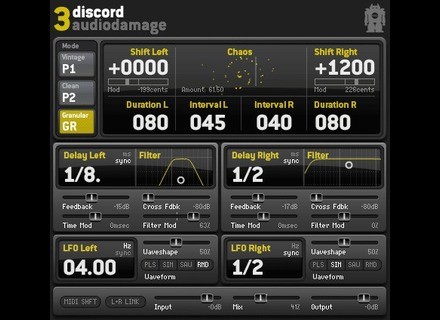 Audio Damage Discord 3
4
This is a pitch shifting software plugin that can be used on many different DAWs. I personally use it on PT 8 LE with my Digi 003 hooked up to my Macbook Pro. The setup was pretty basic, I downloaded the plug-in and installed it shortly after purchasing it. The software worked absolutely fine for me from the minute I started using it. I haven't had the need to use it on multiple tracks per session, so I can't say for sure whether or not it slows down when used a lot. The functions took me a little bit to get used to, as I hadn't really used a lot of other pitch shifters and vocal manipulators before, but eventually I figured it out.

This software works really well in this configuration for me personally. I've also installed it at our studios Pro Tools HD setup and it works just as well there. The plug-in is totally stable, I've never had an issue with it. It's a quick performance and there's a lot of options here, so it can be really effective. There are three different modes of operation with it, and some of them work better for some signals then others, so there's really a ton of variety to be had here.

I like the incredible variety of tones to be found here. I originally thought that this was just to make a voice sound slower or deeper, or the opposite, but I later found that there are tons of processors and effects that can be put on vocals with this thing. Theoretically it'd work with other instruments too, if that's what you're into. I personally have stuck to vocals but I could see it working on lead guitars, violins, and some other instruments as well.
I think that this is one of the cooler processors I've used. I've managed to take perfectly clean vocal sounds and make them sound like robots on tape being electrocuted. There's just so many possibilities with this that even though I think that I wouldn't need it much, it's perfect for when I do need it. I highly recommend it considering how good it is.

Published on 06/01/10
Discord3 is a refresh of the Discord series of multi-effects.