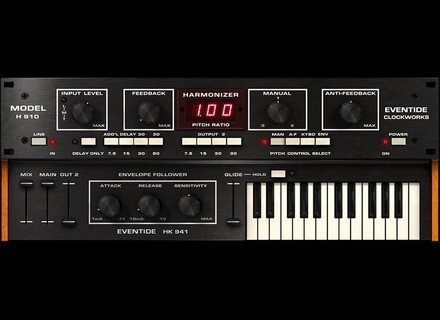 Eventide H910 Plug-in
5
The Eventide H910 Plug-in is a plug-in version of the classic H910, known as the first hardware harmonizing system. This plug-in version is available both within the Anthology II bundle and within a plug-in pack of just this and the H949 plug-in. The studio that I work at has the full Anthology II bundle, so that's where I've used the plug-in. I wasn't involved with installing the plug-in since we had the Anthology II bundle from before I started working there. Regardless of your experience or lack thereof with the original H910, I think users will find that the plug-in version is really easy to use. The parameters it gives you to work with include knobs for input level, feedback, manual, and anti-feedback, while it also has controls for the amount of delay and pitch control. I'm pretty sure it's the exact same make up as the original hardware H910. I don't believe that the manual is necessary here...

The studio that I work at has the Eventide H910 Plug-in and the full Anthology II bundle running on all of our systems. Each of our rooms has a Pro Tools HD system, so I can't say we ever really encounter performance issues with plug-ins, nor have I personally ever had any troubles at all with the H910. It doesn't seem like it would even take up much processing power in the context of an LE system or something similar, but it's hard to say without trying it for myself.

The Eventide H910 Plug-in is an awesome plug-in version of a classic hardware processor and will be an asset to any DAW. It's the kind of plug-in that can add a lot to your sound, regardless of it's being used on a guitar or vocal. Apparently Jimmy Page used the original in his live rig, so if that's not an endorsement of the effect, I don't know what is. It can do a lot with only a few main parameters and really has a unique harmonizing sound that is accentuated by delay. The H910 Plug-in is definitely worth considering for those looking to experiment, both in the context of the Anthology II bundle and the plug-in pack that contains just this and the H949...
Did you find this review helpful?yesno
»