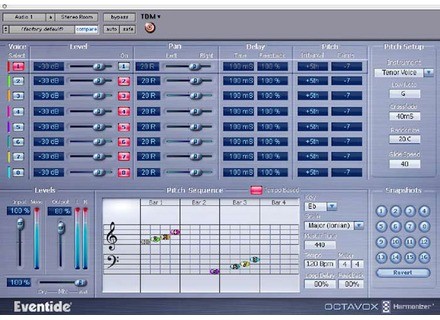 Eventide Octavox TDM
5
Eventide’s Octavox plug-in is both an interesting and unique type of plug-in, consisting of a make up of a few different types of effects and features.<span> </span>I wasn’t involved with the installation of the software, as the studio that I worked at already had it installed on their machine before I got there.<span> </span>I haven’t encountered problems of any sort along the way of using this plug, however.<span> </span>The interface of the plug-in isn’t<span> </span>too complicated, even though there is a lot going on.<span> </span>You’ve got eight channels, each with parameters for panning, level, delay and pitch.<span> </span>There are then general parameters within sections for pitch setup, overall levels, and for taking snapshots to save settings.<span> </span>It also has parameters for key, scale, tuning, tempo, and meter, amongst other things.<span> </span>In addition to these sections, there is a notation grid to map and track your harmonizing.<span> </span>If this looks a bit daunting to you, as it probably will to most people, check out the manual as it will easy your woes a bit.

<p class="MsoNormal">The system that I’ve run Eventide’s Octavox is based with Pro Tools HD, and runs on an Apple Mac G5 desk top computer running Pro Tools 8.<span> </span>I’m not sure the exact specs on the computer, but Pro Tools HD runs with a Digidesign 192 I/O and three Apogee converters, and I know that the computer can take on a good amount of work as well.<span> </span>As long as you’re currently able to run plug-ins at a decent rate on your system, I can’t foresee you haven’t an issue running the plug-in, but keep in mind that I’ve only had the need to run two or three of these within a single session.

Octavox is capable of getting some pretty cool sounding effects, and shows a lot of versatility in what it can do.<span> </span>It has a clean and smooth sound in general, and makes it possible to harmonize in any way that you would like to.<span> </span>It also offers up a nice delay that can help make your pitch shifting and harmonization sound a lot smoother.<span> </span>If you’re looking for an interestingly built plug-in for harmonizing, with a lot of versatility, definitely check out Eventide’s Octavox plug-in.
Did you find this review helpful?yesno
»