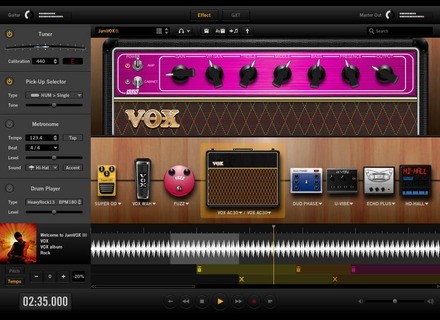 madchap's review (This content has been automatically translated from French)" Hmm ...."

I use (or rather am) since it came out .. it is now version 3 ... but as the previous opinion, this is not a simulator that will make you raise your night!
The clean sound going pretty well. Vox are pretty well done but not better than others, ladle effects too, but distortion (what I use most) of it is not that at all! already sound (grain) is very loud and unpleasant, different amps if not happily all sound the same (!) do not have much original ... fortunately there is the name and the aesthetic recalls more or less models starting otherwise it would be difficult to know what we play!
So the app is not null may be, it is rather a well thought out and practical uses but the simulation is really lagging behind when compared ace he is among competitor they either free or paid for elsewhere! in my opinion this is clearly insufficient and it is better to invest in something else leaves ay the price.

Vox JamVox III
4
I use a Mac, an iMac with Mac OS X Lion.
No installation problems
The manual is .. a manual, but there has not really need

The previous versions were working with a hardware product (an integrated sound card to an amplification system with hp), this version is purely software.

JV3 works fine on this configuration

This is the presentation of JamVOX as amp simulator is misleading or incorrect.
Amp simulators there are better paying (TH, Amplitube, Guitar Rig) and free (LePou..)

In fact it is not at all an amp simulator, it's a great app to work alone at home, which offers the simulation models .. shade.

The sounds are not really terrible compared to the German simulators (Amplitube, Guitar Rig ..) however are quite a few ultra cool features such as
- The slowdown in MP3 (that said everyone but the fact it's great practice)
- The "drum player" who is still a bit cooler than a metronome (there is also a metronome) although it is not configurable. There is a set of tracks in various styles of batteries but you can not change the tempo
- The audio or video recording if the computer has a webcam (which has been encoded with the feet, you have to load an mp3 can to that video recording is accessible).
- A function that removes the guitar on an mp3 (it's called GXT)
- A simulation of micro (I do not use it) it can simulate a single neck humbucker since eg

That said it is simple enough to replicate what JV3:


- PC: Reaper + Lepou (plug ins + LeCab simulation for impulse) + Redshift (micro simulation) + a plug in to a rhythm box: grossomodo same features, perf incomparably superior and it's only contribution to Reaper,
- On Mac: Reaper or Garageband, but not micro simulation (Redshift is no Mac version) and is reCabinet (fee) is patience (Lepou prepares a Mac version of its LeCab) for the speakers, more just a little reverb though (there are in the cool free).

The advantage of JV3 is that we all in the same app.

I used various software solutions (3 Amplitube Free, great for clean sounds), Guitar Rig Player 5 (great interface and some sounds not bad at all) and Reaper + Lepou

All are better than JV3 his side.

However, JV3 is great for his part all-in-one that's not really a tool for a musician, but a tool for someone who is learning (or working) on ​​guitar.

I bought it in April 2012 because it is proposed to be $ 49 38euros at this price it's a plan of hell. More expensive I would not have bought.

All that JV3 we can do better with a DAW and plug ins .. the advantage of JV3 is to have all in one. For a recitation of pentatonic scales, the ultimate quality of the amp sound is secondary to the practicality of the product.