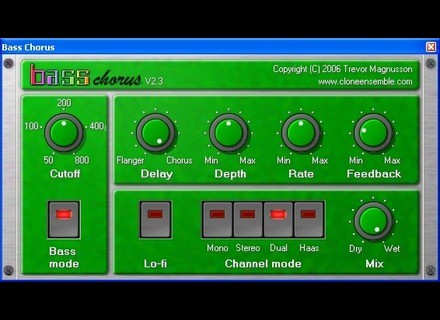 Clone Ensemble Bass Chorus
4
The Clone Ensemble Bass Chorus is a free plug-in for your DAW running on Windows. You can use it as either a VST or Direct X plug-in, but it’s still limited in it’s reach since you can only install it on Windows as far as I know. The plug is downloadable from Clone Ensemble’s website still, even though this is a few years old now. Even though it’s labeled a chorus plug-in for bass, it’s also a flanger. The interface has parameters for delay, cutoff frequency, depth, rate, feedback, and mix, as well as buttons for bass mode, lo-fi, a choosing the type of channel configuration you’d like. I doubt that they made a manual for this since you don’t really need one and most free plug-ins won’t have one anyway.

I’m no longer running the Clone Ensemble Bass Chorus since my current system is no longer compatible. I have a Mac running Pro Tools now, but I ran this on my old system when I had Cubase SX on a Hewlett Packard Pavilion dv8000 Notebook. The computer had a 3.0 Ghz processor and 2 GB of RAM, while I ran the plug-in mostly in version 2.0 of Cubase SX. This plug-in is very low processing power consuming, so I wouldn’t worry too much about it taxing your system much.

Being that it’s free, there’s no reason not to have the Clone Ensemble Bass Chorus plug-in running if you’re able to. It’s a pretty nice sounding plug-in and is capable of getting a nice array of different modulation effects for bass. You can really use this on anything, but it does work best with bass guitar even though you’re probably not going to need this effect for bass too often. It’s not bad sounding, but I would never purchase the plug-in and would never have used it if it wasn’t free. If your DAW is able to run this plug-in, I’d recommend heading over to Clone Ensemble’s site and giving it a shot for yourself.
Did you find this review helpful?yesno
»