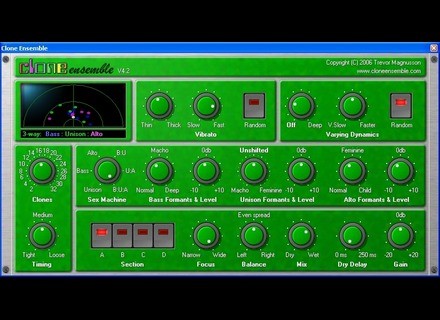 Clone Ensemble Clone Ensemble
4
The Clone Ensemble plug-in, made by the brand of the same name, is an in depth software chorus for Windows based operating systems and in VST and Direct X plug-in formats. This is Clone Ensemble's main plug-in, hence the name. You can download a free version of the software from their site, but it's not fully functionable. I don't remember too much about the specifics here, as it's been a few years since I had it on my system. The plug-in has a lot to offer in terms of control and parameters, with sections for timing, vibrato, varying dynamics, EQ, 'sex machine,' and main controls like mix, balance, focus, dry delay, and gain. Just check out a screenshot on Clone Ensemble's website or the picture above to get a better idea of what's available here. I don't know if there's a manual or not for this plug-in.

I no longer have a compatible system to run Clone Ensemble and haven't had one for a few years. Before I switched to Pro Tools, I was running Cubase SX on a Hewlett Packard Pavilion dv8000 Notebook that I had this plug-in up and running on. I don't remember exactly how I got it, but I believe I got it a plug-in collection put together by someone else of all different brands. The HP computer I was running this on had a 3.0 Ghz processor and 2 GB of RAM, which was enough for me to run the plug-in without any problems. I wouldn't think too many users would experience performance issues with this.

For shareware software, the Clone Ensemble plug-in is a nice one to have around. Only Windows users will be able to use this, but it's not too big a deal as most Mac users will most likely have chorus plug-ins better than this one anyway. It's effective and unique, making it worth having for Windows users, but definitely isn't crucial to have by any means. When I got this a few years ago I'm pretty sure it was free for the full version, although it doesn't look like that's the case anymore. However, I would think you could find the full version as shareware pretty easily. If you can, check it out for sure but it's no sweat if you can't as there are others out there!
Did you find this review helpful?yesno
»