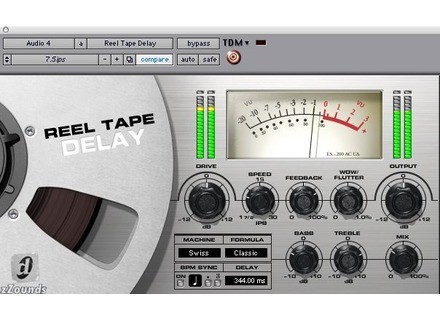 Avid Reel Tape Delay
4
It was very easy to download and install the Avid Real tape delay plug-in. There were no compatibility issues with my machine and I haven't had a problem with any sort of installation issues since I installed it. The interface of the plug-in is very easy to follow and there are a lot of really cool things that it can do. It has parameters for input, output, blend, feedback, delay time, and for what kind of note you want it to be on (quarter note, eight note, etc.). It also has either a normal, dark, or bright tone switch and either vintage or modern mode. It has helpful meeting in the forms of input level, output level, and BPM. You can also tap the tempo so you can get it right on whatever you are playing over! Comes in very handy...I've never seen the manual.

I am running the Avid Real tape delay plug with Pro Tools LE 9 and a Digi 002R for an audio interface. I never had a problem running this plug-in with this machine. I have also used this plug-in on a Pro Tools HD configuration and there was never any trouble with it there either. I get great performance from it as I am able to run a few of them at a time if I really wanted to. Normally I put it on an aux input and send buses to it, as this helps my overall performance.

I've been using the Avid Real tape delay plugin for about a year. Avid plug-ins have been somewhat new to me, but in the short time I have been using them, I have been thoroughly impressed. The Avid Real tape delay plug is one of their best plug-ins. It is easy to manipulate and you can get an array of delay sounds from it. The tap tempo and BPM metering features are very helpful as they let me aim right on top of what I am playing on. For the price you're getting a smartly designed plug-in with a great tone to it. I love the slapback and other delay sounds I get from this and will continue to use it as part of my arsenal.

Avid Reel Tape Delay
5
The Avid Reel Tape Delay is a plug-in that is a part of Avid's (formally Digidesign) Reel Tape Suite of plug-ins. Also included in the bundle are Avid's Reel Tape Flanger and Reel Tape Saturation plug-ins, which have a similar looking interface. Of the bunch, the Reel Tape Delay is probably my favorite one. I didn't have installing it as I did so along with the other plug-ins in the bundle since you do the whole thing at once. I believe it's only compatible with Pro Tools since it's an Avid (Digidesign) product, and it is available for both Mac and PC. As I mentioned before, all the plug-ins in the bundle share the same looking interface, which is kind of vintage looking and has a large tape front and center. As far as parameters are concerned, it's got knobs for drive, speed, feedback, wow/flutter, mix, bass treble, and output. It also gives you the ability to choose the type of machine and the amount of delay you'd like in milliseconds. You can also set the rhythmic pattern of the delay. I don't know what the manual for this plug-in is like since I haven't had a need to check it out.

I'm running the Avid Reel Tape Delay plug-in in Pro Tools LE 8 on my home system primarily, but have also used it a bit on the Pro Tools HD system that we have at the professional studio where I work. My system consists of a Mac Book Pro that has 4 GB of RAM and a 2.2 Ghz Intel Core 2 Duo processor, and the version of Pro Tools that I'm running is Pro Tools 8. It's worth noting that I usually run this on an auxiliary channel and bus tracks to it to save processing power, but in general I've never had a problem running it.

The Avid Reel Tape Delay plug-in is definitely my favorite in the Avid Reel Tape Suite of three plug-ins. Perhaps it's because I tend to use delay more than I would a flanger or a saturation plug-in, but I really like the full and warm delay tones that I get with this plug-in. I've used it mostly on vocals, but I've also liked the way it sounds on electric guitars as well. There are a lot of setting controls, so you can get all sorts of different sounds with the plug-in, which is another reason why I like it so much. Usually it's a toss up between this and the Bomb Factory MoogerFooger Analog Delay plug-in if I'm looking for a sort of warm, usually slap back sort of delay sound for a vocal...