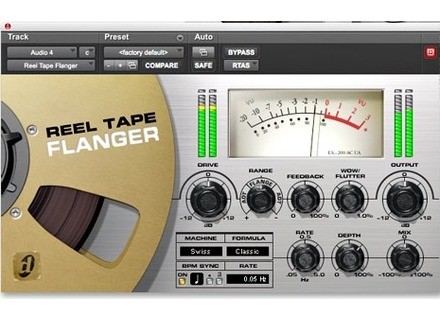 Avid Reel Tape Flanger
5
The Avid (formally Digidesign) Reel Tape Flanger is a plug-in that is apart of the Avid Reel Tape Suite of three separate plug-ins. I have the full bundle, so I installed it all at once. I'm not sure if you'd be able to buy this plug-in individually or not. I didn't have any issues installing the plug-in suite, as it was just like installing every other piece of software out there. Not sure if this bundle is only available for Pro Tools, but that is often the case when it comes to Avid/Digidesign plug-ins. The interface of the Reel Tape Flanger plug-in is fairly simple to break down and understand. It's really just a series of knobs, which includes settings for drive, range, feedback, flutter, rate, depth, mix, and output. It also has options for choosing the type of tape machine, frequency, rhythmic pattern, and formula. It will take a bit of trial and error to figure out how to use everything to it's potential, and I'm not sure if the manual would be helpful in this since I have not seen one.

The system that I'm running the Avid Reel Tape Flanger plug-in and the full bundle on is Pro Tools LE based. I've got a Mac Book Pro lap top that has a 2.2 Ghz Intel Core 2 Duo processor and 4 GB of RAM that I run Pro Tools LE 8 on that includes this plug-in. I run Pro Tools with a Digi 002R audio interface and if it matters, I monitor with a set of Adam A7's. This system has been more than adequate for running this plug-in and the others in the bundle, as I can't say I've ever had a performance issue with it...

The Avid Reel Tape Flanger is overall a pretty awesome plug-in. There's a whole lot that you can do with it, which I really like seeing, especially in a flanger where you usually don't see all that many unique parameters and controls like this one. While it definitely has a warm sound, I don't know that I'd say it has a 'tape' sound per say. It does however, have a really full flanging sound that is great for getting a doubling kind of sound and for more effect like sounds. My favorite thing about it is the flexibility, as out of all the flanging plug-ins that I have it's got the most to offer in terms of parameters. If you're at all interested in this plug-in, I'd recommend checking out the other plug-ins in the bundle to see if it would be worthwhile for you. The bundle isn't very cheap, so it's not worth it for just this plug-in, but the others are quite good as well if you think you might have a use for them...