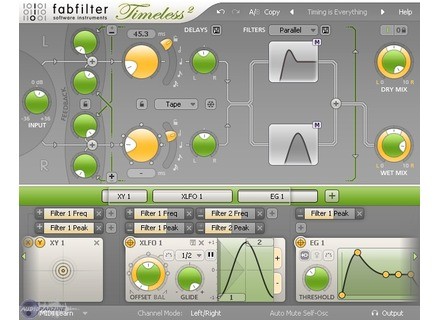 View all offers for FabFilter Timeless 2 »

FabFilter Timeless 2
5
The FabFilter Timeless 2 plug-in is a piece of unique and versatile delay software for DAW’s of all types. FabFilter has a little known but very nice collection of plug-ins for all applications, with this one being one of the only delay plug-ins they have. I’m assuming that there is an original Timeless plug-in since this is named Timeless 2, but I’ve only used this version of it. I don’t currently own this plug-in so I can’t speak much about the process of installing it. However, learning how to use it basically shouldn’t take too long, although there’s definitely a nice amount of control and a few features you won’t find in too many other delay plug-ins. The interface gives you independent control of it’s parameters in both the left and right channels, which is definitely unique and quite awesome! Both the left and right channels have knobs for controls for feedback and cross feedback, as well as delay time and delay panning. Each also has it’s own filters which can be used either in series, in parallel, or per channel, so you’ve really got all of the bases covered there. However you decided to use the filters, which are FabFilter’s specialty, you’ve got frequency, panning, peak, and mode control, as well as the ability to use them in either high, low, or band pass modes. They also have a number of tone modes to choose from, further adding to the possibilities here. Lastly, there is control over the dry and wet mix levels. This is pretty in depth, so those new to delay and plug-ins should definitely consider looking at the manual.

I’ve been using the FabFilter Timeless 2 plug-in over at a producer’s studio that I’m an assistant for. He’s got all of the FabFilter plug-ins and really can’t get enough of them, and I don’t blame him. It’s a Pro Tools HD system that we’re running it on, so we rarely have problems at all when it comes to performance, but I wouldn’t be too surprised if a not very well equipped system had trouble running more than one at a time…

To go along with the FabFilter Timeless 2’s endless amount of control comes a super clean and realistic sound as well. It’s not the warmest sounding delay I’ve heard, but if I’m looking for warm, generally I won’t look in a plug-in anyway. What this is great for is getting all sorts of clean digital delay sounds, and when I say all sorts, I mean every sort! The amount that can be altered here is simply superb as you’re not going to find this amount of control within many plug-ins, but that’s what makes FabFilter so great! Do yourself a big favor and check out Timeless 2 and the other awesome FabFilter plugs.

FabFilter Timeless 2
5
No problem for installation. For cons, the enormous possibilities of this delay makes it more complex to take over than the average plug-ins in its class. Fortunately, there is a multitude of presets all the more interesting one than the other that can serve as basis for work and put your foot in the stirrup.

I use it for a year and a half. This plug-in opens up virtually limitless thanks to filters and its enormous potential modulations. We can get results really crazy, especially interesting for me to dub or industrial. My only regret is that I can not get an echo which becomes a little more acute, or slightly more dull with each repetition. I guess for that, it would have filters included in the feedback loop. I had a little plug-in that allowed this when I was in MacOS9. But I never found an equivalent to my current environment. But hey, do not spoil our fun: The Timeless can still happily be delirious with echoes of madness!

Published on 11/29/11
FabFilter has released updates for all FabFilter plug-ins, introducing support for the new AAX plug-in format in Pro Tools 10.

View all 3 videos of FabFilter Timeless 2 »