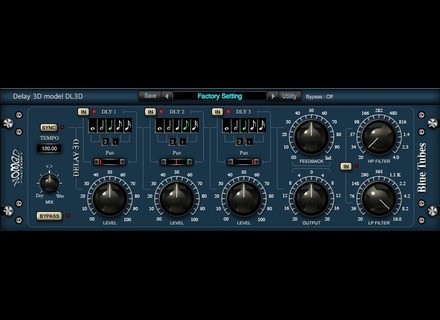 Nomad Factory BT Tempo Delays DL3D
5
The Nomad Factory BT Tempo Delay DL3D is an in depth delay plug-in that comes with the Blue Tubes Effects Pack. The bundle has six plug-ins in total, with this being the only true delay of the bunch. I don't have the bundle at home so I wasn't involved with installing this at all. Learning to use the plug-in isn't as easy as some of the others in the bundle, but it's still not very difficult, although there is a lot to be aware of here. The effect has three separate tempo delays that can be set to a few different rhythms and each have their own level and panning control. It then has a BPM parameter to sync it up to your track, as well as a mix parameter and general knobs for feedback, output, and a high and low pass filter. I haven't seen a manual for this plug-in or the others in the bundle, and I don't think one is really needed as this is going to be easy enough for most to figure out on their own.

The studio I work at has this bundle and the Nomad Factory BT Tempo Delay DL3D plug-in on a few different systems. I've used it on two separate systems for the most part, with both of them being used in Pro Tools HD. Our main room has a Mac Pro desktop computer with 10 GB of RAM and dual 2.66 Ghz Intel Xeon processors. I've never had a problem running nearly anything here, so this has been no different for me. As for LE users (or comparable systems), I don't think you'll have much trouble running this as long as your system is currently capable of handling some plug-ins.

The Nomad Factory BT Tempo Delay DL3D is a great plug-in to have in any collection. It's easy to use while it still provides you with a lot of control between the three separate delays found here. It's got a full overall sound that I've found nice for using on vocals, guitars, and anything else where you might want a lot of delay. It's not the best for slapback, but is still effective when it comes to a number of different types of delays. I'm not sure if you can purchase this as an individual plug-in, but it's worth checking out the full BT Effects Pack either way as it perfect for those looking for new plugs on the cheap.
Did you find this review helpful?yesno
»