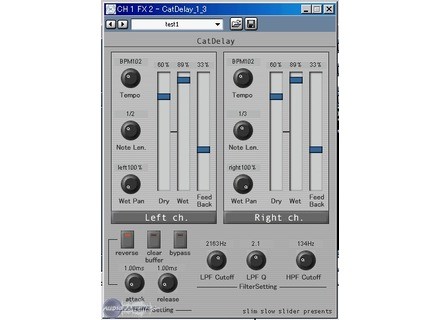 Slim Slow Slider CatDelay [Freeware]
4
Slim Slow Slider's CatDelay is a free piece of software that comes in VST format. I no longer have a compatible system now that I run Pro Tools LE, but I used to run this plug-in in Cubase SX 2.0. I honestly don't remember too much about the installation process of this plug-in, but it should be simple enough as long as you don't have any compatibility issues or anything like that. The interface of the plug-in actually has a good amount going on for free plug-in. Both the left and the right channels have knobs for setting the tempo/BPM, the note length, panning, wet level, dry level, and feedback. It then has filter settings for a low pass filter cutoff and Q, and a high pass filter cutoff as well. Lastly it has attack and release knobs and a few buffering buttons. I haven't ever had a need to check out a manual for this plug-in, and I'm not sure that they even make one since it is a free plug-in.

When I was running this plug-in, it was on a Hewlett Packard Pavilion dv8000 notebook computer with a 3.0 Ghz processor and 2 GB of RAM. I ran the plug-in strictly in Cubase SX 2.0 and later in 3. I'm not running the Slim Slow Slider CatDelay plug-in any longer since I've made the switch to a Pro Tools LE system, which this isn't compatible for. For the time that I did run the plug-in it always seemed to run pretty sure of itself for me as I can't recall ever having a problem running it. Every system is different, so it really depends on your set up to determine how well this will run for you. Being that it is free, I'd just test it out for yourself.

There aren't too many free VST plug-ins out there that I'd recommend going with before the Slim Slow Slider CatDelay. While I do have many other newer delays that I like better than this one, when I didn't have as many options, this plug-in saw a good amount of playing time. It's quite easy to use while still offers up a ton of control. The overall sound quality doesn't make it the most realistic sounding delay plug-in available, but for a free one that is kind of old now, I've got nothing to complain about. The best part is of course the fact that it's free - so what are you waiting for?!
Did you find this review helpful?yesno
»