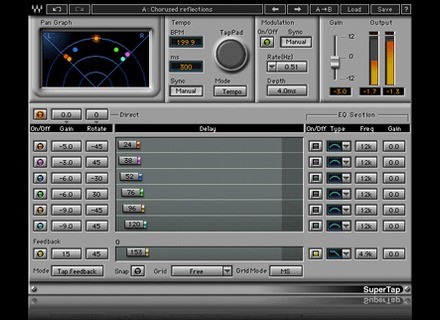 View all offers for Waves SuperTap »

Waves SuperTap
4
This is like the mack daddy of delays. This thing has nearly everything you could ever want, and then some. If you ever wanted to do some multi tap delay, it can do it. If you wanted to do some crazy modulated delay, it can do it. If you just want a basic delay, it can do that too. The plugin is very complex, so if you're just heading into this without much experience, you might get a bit lost. I recommend reading the Waves manual for this and maybe even trying to find some tutorials online. You can choose between 2 tap and 6 tap components, tap-pad for adjusting the switching pattern or tempo tapping, a global LFO with two different feedback modes and more. There are really tons of things packed into this that would take forever to list. To use this, simply enable it on whatever buss you want to have delay on. I like to use it on an aux buss and mix it into whatever I want delayed, but it depends on the effect I'm trying to achieve.

This plugin is awesome for delay, but it can be a bit of a head spinner if you're not totally used to using these multi-tap delay plugins like this. There are lots of features packed into this, so be ready to experiment and start having fun messing with this thing. My go-to plugin is just the basic Logic stereo delay plugin, but if I'm serious about delay, I usually find myself reaching for this.
Did you find this review helpful?yesno
»

Waves SuperTap
4
The Waves Super Tap plug-in is a digital recreation of analog tape delay. The plug-in comes in pretty much all of the Waves plug-in bundles, but also is available individually. It doesn't have an analog delay sound, but it's make up is like that of an analog delay. You can use it in either two or six tap versions and it's definitely versatile beyond being just a simple tap delay. Each of the bands of tap has parameters for gain, delay, rotate, and equalization. There's also a feedback band that has the same parameters. You can also set the BPM to synch up with the plug-in, in addition to parameters for a modulation effect and overall output gain. You can also tap tempo if you don't have a BPM to synch it up to. It's an overall in depth but pretty easy to use interface, and while I haven't seen the manual for this, I don't know if one is needed anyway.

I'm running the Waves Super Tap plug-in at home as well as using it on the numerous systems that we have at the studio where I work. At home I've got it on my Mac Book Pro laptop that has 4 GB of RAM and a 2.2 Ghz Intel Core 2 Duo processor, while I'm running it Pro Tools 9. At the studio we're running it on all Pro Tools HD systems, which is enough said since we rarely have issues with these. Either way, I can't imagine too many users having issues with this as long as you're currently able to run plug-ins pretty comfortably.

The Waves Super Tap plug-in is definitely a nice take on digital delay and there's certainly a lot that you can do with it. It doesn't sound anything like an analog delay, but it's cool that it's got the different taps as it really adds to it's flexibility. The modulation effects in here are effective as well and definitely a nice added touch. Super Tap is great for just about any situation where you'd want a digital delay, but if you're looking to emulate an analog delay, this isn't going to be it. I'm not sure that it's worth buying Super Tap individually, but if you have a Waves bundle you most likely have it already. If you don't, it's yet another reason why looking into one is a great idea.
Did you find this review helpful?yesno
»

Waves SuperTap
5
This installed without any problems. I didn't have any compatibility issues with this plug-in on my computer. The configuration as far as getting it to work on your computer is very simple, you just need to make sure you register it and that your host software adds it to its VST list. Configuring the software to use it in your music is definitely a bit more difficult. This plug-in has a little bit of a learning curve but it's very convenient and powerful after you learn it.

My computer is a Dell desktop that runs Windows XP. I have a dual core processor and 4GB of ram. For host software I use Nuendo. This program works perfectly well with my DAW, as it should with all other major DAWs that support VST format plug-ins. This plug-in is not very CPU intensive. On my system it uses less than 1% of my CPU overhead, so you could be using a lot of instances of Super Tap and it won't be too much of a strain on your computer which is nice. It is also overall very stable, although it did crash one time that I remember when I was trying to automate a parameter.

I have been using this for a few years. One of my favorite things about this plug-in is the tempo tap feature which is absent from most software. With the tap feature you can quickly tell the computer how you want your delays set up without having to do any mental math. Then for further customization you can pan each delay and also EQ them with the built in EQ filters. You usually would have to do this with several plug-ins and special panning moves without this great tool. If you don't want to tap out your delays, there is also a great visual map of the delays that are set up to happen, and they snap to the tempo of your host as well. There are a lot of features in SuperTap, and it is kind of overwhelming at first, so be advised that you should actually read the manual, and it will be a lot easier on you. It's a great value for the price, this is my favorite delay software. I would get it again.
Did you find this review helpful?yesno
»

See all 204 photos of Waves SuperTap »