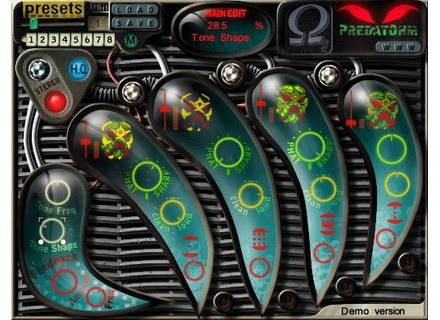 Ohm Force Predatohm
5
Ohm Force Predatohm is a unique four band distortion plug-in.  I didn't have any issues installing the plug-in as it was easy enough to download it from their website and follow the instructions for installation.  The interface in the picture shown is actually an alternate skin for the plug-in, the original skin is a lot more user friendly and easy to understand, so I would start with that one first.  Each of the four bands of distortion have parameters for level, character, intensity, distortion amount, and distortion type.  There are also a slew of parameters on the left side of the plug-in including sections for tone, feedback, and 'super stereo.'  I haven't needed to look at the manual for this plug-in, so I can't say anything about the make up of it.

I am currently running Ohm Force Predatohm on a Mac Book Pro that has a 2.2 Ghz Intel Core 2 Duo processor and 4 GB of RAM.  I run the plug-in only in Pro Tools LE 7.4 that runs with a Digi 002R audio interface, and within the configuration I can't say I've ever had any problems running Predatohm.  I'm able to run a bunch of them within a single session, but don't overdo it too often so I can't say that I would be able to run an endless amount of these plug-ins.  I've been running the plug-in only for only a few months but it has become one of my favorite digital distortions to use in this short time.

I would definitely recommend checking out Ohm Force Predatohm if you are in the market for a good sounding distortion plug-in.  While I don't tend to be a fan of digital distortions at all, this one has some really cool features and sounds.  Beyond this plug-in, Ohm Force makes some great plug-ins and I would definitely recommend checking out the bundles that they have to offer as they are very reasonably priced and make each individual a lot cheaper.  Also, if you are a student Ohm Force offers up a 50% discount!  All in all, Ohm Force Predatohm is a powerful plug-in that should definitely be looked into by home and professional studio owners alike.

No problem of compatibility does not affect computer performance.

Used for 3 months.
Dramatic effect when inserting a slice of whatever source (bass, drums, guitar, vocals ...)!
Password exaltation, this type of plugs is more like a fact that a real production tool type equalizer, compressor, etc..
The product price is Ohmforce trs attractive in view of their performance.

INTERESTED in rsum plug in, addressing more musicians and / or homestudiotistes Aviss that ingnieurs of professional sound.