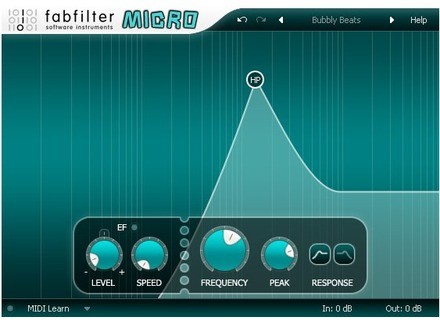 View all offers for FabFilter Micro »

FabFilter Micro
5
We use this on a Mac Pro duo with snow leopard, Logic 9 and Ableton 8. There has been no issues to date. You will not need a manual for this plugin if you are familiar with a basic lowpass/highpass filter. It's a simple but solid plugin. The interface is quite pleasing too look at actually and very easy to read and navigate. All the functions are on the face with the exception of the "buttons" on the bottom (input/ouput and Midi Learn). Clicking on these makes the knobs for these parameters fade in.

The software works perfectly fine in our setup. It loads quickly and no crashes or glitches whatsoever. This plugin is a very well tuned machine. The filter is very smooth especially for a digital one and has brought me back to believing that digital filters can sound good. I have been using this for 5 months extensively

What I like most about this filter is it brings a good name to digital filters. I started using the lowpass plugins that were built in Logic and Ableton respectively. Both were pretty bad with the ableton one being the worst. The big problem was when quickly swiping the filter, it was filled with all sorts of gaps and even little noise artifacts. Basically not smooth at all and therefore and ear sore. This filter is a huge step forward. It is much more rounded and fluid even when switching between highpass and lowpass via two buttons easily found on the interface. Midi learn those two buttons for some sweet filter flips. In all fairness this filter is not perfect. It gets sort of metallic and brittle with a lot of resonance. I guess that is the nature of digital filters though so maybe thats not fair. I often use my Moog Lowpass (and now my slim too so I can do stereo unlinked of course) on most of my filtering needs and its truly hard to beat. They are unbelievably full and warm across the board. So instead of saying "not perfect" I should say its a different beast. It definitely sounds good though. The studio bought the full package of 10 plugins. I've liked all of the fabfilter stuff so it was a good investment.
Did you find this review helpful?yesno
»

FabFilter Micro
5
The FabFilter Micro is a single band filter plug-in that is available for Mac or PC operating systems and in VST and RTAS formats as well as AU for Mac. The Micro plug-in is based on FabFilter's original plug-in, but is a lot simpler since it's just one band and is also a lot cheaper. You can download a trial or buy the full version straight from Fab Filter's website. Installing the plug-in was straight forward and not complicated at all really - just follow the step by step instructions as you would for installing any piece of software and you should be good to go. The interface of the plug-in is definitely user friendly, as they've made it as easy as possible to use with this simple, one band make up. It also looks cool and is easy on the eyes with the color and the graph that allows you to visualize your filtering. I haven't looked at the manual for this plug-in and don't anticipate ever needing to.

The system that I've used the FabFilter Micro plug-in on is Pro Tools HD based. I don't own it and it was at a friend's home studio, so I don't know all of his exact specs, but suffice it to say that it's a pretty fast system and being that it's Pro Tools HD, it's able to handle just about any configuration of plug-ins anyway. I can't say how well it will run on an LE system or something similar, but I don't plan on it being a problem since I'll soon be picking this up myself for my home studio which is LE based.

Overall, the FabFilter Micro is a great little plug-in. While it's not as versatile as the original FabFilter One, which is what this plug-in is based on, it's still very useful and if you stack them it's essentially the same sort of effect. I've used the FabFilter Micro plug-in at a friend's home studio that is really more than a home studio since he's got a tracking room built in. He swears by this plug-in and so I decided to give it a shot while I was working a bit with him there and have to say that I love the sound. It's awesome for getting creative or for doing some traditional EQing with one band. The best part about the Micro is the price, so if you want a cheap filter plug-in that's easy to use and sounds great, it's definitely at least worth giving the demo a try.
Did you find this review helpful?yesno
»