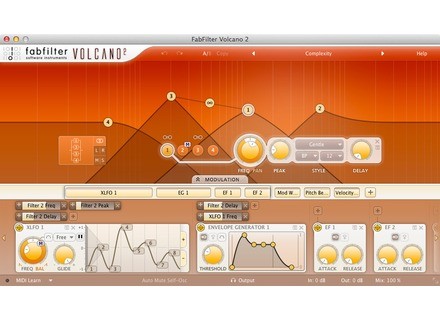 View all offers for FabFilter Volcano 2 »

FabFilter Volcano 2
5
Simple installation and authorization. The interface of this plug-in may seem surprising at first glance those who do not know FabFilter. But in practice, it is very logically organized and everything is easy to understand without needing manual. That said, the very fact of its vast possibilities, this may require a little time to take in hand. We can not recommend enough to make a small overview of the many presets available.
You can enable one to four filters (for each choice: LP, HP, BP and slopes of 12 to 48dBs octave.) Sound of each may be more or less aggressive presets for eleven evocative names: smooth, tube, metal, extreme etc.. The filres may evolve independently of each other or linked in their movements. There is for each of a set of cut-off, resonance, panning. We can apply a delay and make them act in series or in parallel.
For modulation, you can choose "XLFO" (LFOs and séquençables "randomisables"), envelopes ADSR, the "envelope followers" (with the possibility of side-chain for the latter two) and any source by twelve o'clock the "Midi Learn". Everything can be modulated, including modulators parameters themselves. In fact, I do not know how modulators can be stacked, I've never reached the limit. In XLFO, which serves small sequencer, you assign one to fear sixteen steps along a curve that can be made more or less square, more or less sinusoidal (test section preset "Arp & Sequence").

This plug-in works without any problem on my Mac Pro, Digital Performer. Stability is perfect. CPU consumption is almost negligible.

I use this for three years. As we have seen the possibilities are enormous. Obviously, all the effects imaginable wha-wha are possible. However, if I want an effect like "wha-wha pedal", I use the more readily "WOW" Sugar Bytes (see my review on this plug) that offers made "wild" more aggressive. I used the Volcano when I need a filter type "synth" more clean. And in this vein, it must be said: The sound filters that plug-in is absolutely amazing! It can be mild, but it can also be violent. By combining the four filters can achieve effects truly original. I encourage you to test presets category "FX" on a synth sound rich in overtones, this is stunning! A spacey effects us! It's crazy, but try though, it always falls on an outcome of interest. This is very good for inspiration! This plug-in is now available at 110 € and for me, it's worth it. As the saying goes: I would do this choice without hesitation!

grodolak's review (This content has been automatically translated from French)

FabFilter Volcano 2
5
DOWNLOADS demo version we then allow the plug via a response that / authorization on the site FabFilter.
Archi simple.
I use the AU version with DP5.

No manual supplied but a Help function in the hyper-efficient plug.
And then all this plug fawn is so well done that is immersed in as and in complete ease.
Ms. coming version of Volcano I.

The plug is not CPU intensive.

The performances are simply amazing.
One wonders how a small plug as did all of Manir monstrous sound.

I am a fan of analog filtering is achieved by Nirvana digital creation area.
All sounds that fall within this plug come out with thanks.
It is ultra-stable and not crash when using this plug-in was really feeling this software dvelopp through.
Not like in some competitors we feel o 'the ct beta "software on the first version.

I use the plug-in from the first version.

When it comes to the version I beginners it is a bit Drout and it suffers from the syndrome: "C'tait better before."
But be careful when you start to toy with 4 filters that modulate rsons in every sense, is not laughing matter.
Just take a walk in the presets to be aware of the tense of possibilities of this plug.

We can use this plug as a qual - a multiband filter - phaser - an FX 3rd millennium what.

What I like most is the flexibility of its modulations and filters!!
What I like least ... this is not freeware
I tried a lot of plug-ins and the problem is when they emmne in extreme rglages has rarely sounded good.
Volcano II excels in rglages borderline.
The report qualitprix is ​​a joke compared what this software (+ / - 100).

Published on 11/29/11
FabFilter has released updates for all FabFilter plug-ins, introducing support for the new AAX plug-in format in Pro Tools 10.

View all 4 videos of FabFilter Volcano 2 »