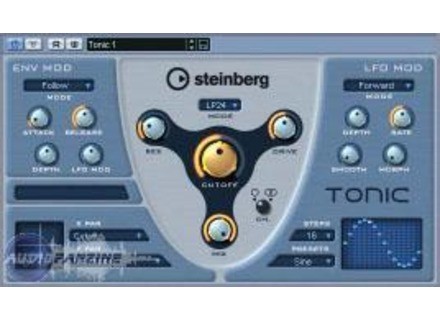 Steinberg Tonic
4
Steinberg Tonic is a filtering plug-in that I used to use when I was running Cubase SX 2.0. I didn't have to install the plug-in, as it was up the point where this was coming installed with versions of SX. Since I was running it with what I believe is the only sequencer you can run it on, Cubase, I of course did not have any compatibility issues. The interface of Tonic is generally easy to navigate around. It has sections for envelope modulation and LFO modulation, as well as a variety of other types of parameters to work with. In the middle it has main parameters for mode, cutoff, resonance, drive, and mix. It also has a mix parameter, and two different types of programmable graphs. These aren't exactly worldwide parameters, but I felt I caught on pretty quickly. I've never seen a manual, and wouldn't even know where to look one if I wanted to.

When I was running Cubase SX 2.0, I ran Steinberg Tonic on a Hewlett Packard dv8000 Pavilion Notebook lap top. The computer had a 3.0 Ghz processor and 2 GB of RAM. I was running a MOTU 896HD audio interface in tandem with the Cubase software. Tonic is really a plug-in that will only demand a low amount of CPU power. I was able to run a number of them within a single session if I so choose, but this was generally a plug-in that I used sparingly. I first used the plug-in about six years ago, but haven't used it in a few years since I switched from Cubase to a Pro Tools LE system.

Steinberg Tonic can't be purchased individually, and only came with certain version of Cubase. I'm honestly not even sure if this is a plug-in that they still put in the program, and I would be leaning to say that they probably don't. This isn't the best filtering plug-in out there anyway, as there are a ton that are available that are more useful overall than this one. However, Tonic does have some pretty interesting capabilities and it was a nice little plug-in to have around, mostly for creative purposes. I can't say I'd recommend it really since you won't be able to get it unless you have Cubase that already has it, but if you do, be sure to play with Tonic a bit to see if it might be useful for you as I found it to be.
Did you find this review helpful?yesno
»