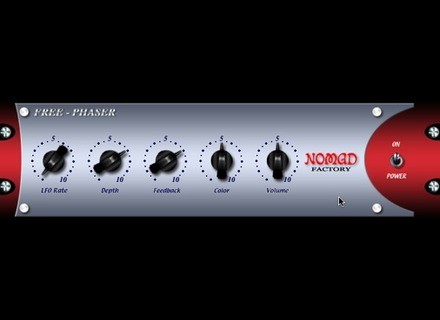 All user reviews for the Nomad Factory Free Phaser

Nomad Factory Free Phaser
5
Nomad Factory's Free Phaser is a plug-in available for free within their free bundle. The bundle also includes a sweeper and a tremolo plug-in as well. I believe that these plug-ins were the original plug-ins made by Nomad Factory, and are now available free on their website. It now says on their site that you get them free with purchase, but I was able to download them without purchasing anything (although I do own some Nomad Factory plug-ins anyway). The plug-in comes in a variety of different formats including RTAS and VST, so most people shouldn't have a problem with a compatibility. It only takes a minute to download and install, as you just need to follow the step by step instructions that will pop up on the screen. The interface of this plug-in is very straight forward and easy to understand. It simply has a series of five knobs that will control the LFO rate, the depth, feedback, color (tone), and volume. A manual surely isn't necessary for this plug-in, really no matter what level you're on.

I'm currently running the Nomad Factory Free Phaser on a Mac Book Pro that has a 2.2 Ghz Intel Core 2 Duo processor and 4 GB of RAM. I run it in Pro Tools 8 which runs with a Digi 002R audio interface. This plug-in is one that won't take up much processing power at all, so I've never had a problem running it ever. I've also never used more than a few instances of it at a time however, but since it is a modulation effect I don't think that many users will need to be doing so anyway. I've also run this plug-in in Cubase SX, starting about four years ago or so.

Like I say often about free plug-ins, you really can't go wrong with them. Although many times they aren't the best sounding plug-ins, since they're free you can always at least try it out to see if it works for you or not. While this is the case with the Nomad Factory Free Phaser, it does have some usefulness and I'm glad to have it around. I definitely have a few other options for phasing that I'll use first, but on occasion I'll find that this plug-in will bring something to the table that I'm not able to do elsewhere. The Nomad Factory Free Phaser and Free Bundle are definitely a must have for any DAW user.
Did you find this review helpful?yesno
Cookies help us improve performance, enhance user experience and deliver our services. By using our services, you agree to our use of cookies. Find out more.