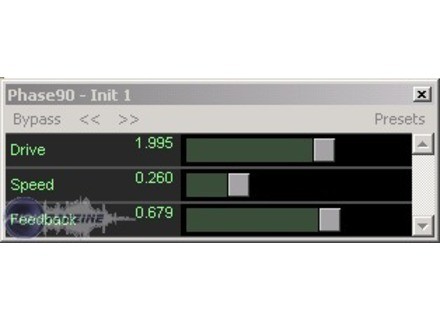 Smartelectronix Phase90 [Donationware]
3
The SmartElectronix Phase 90 plug-in is a phaser effect plug-in that comes in VST format. It's also a free piece of software. It is modeled after the MXR Phase 90 pedals, as the name obviously states. You can download the plug-in free straight from SmartElectronix's website, so the whole process should only take a few minutes as long as your system is compatible with this plug-in. The interface is extremely simple, and somewhat limited, as it only contains parameters for drive, speed, and feedback, which is more than the original Phase 90 pedal has, which only has a parameter for speed. I feel like if they weren't going to keep true to the original, there's no reason why there couldn't be a bit more control over your sound here. A manual probably wasn't made for this plug-in, and isn't necessary either way.

I don't run this plug-in any longer, but when I did I ran it in Cubase SX on a Hewlett Packard Pavilion dv8000 lap top that had 2 GB of RAM and a 3.0 Ghz processor. The SmartElectronix Phase 90 plug-in was able to run extremely smoothly no matter how many of them I wanted to have going at once, which admittedly wasn't very much or very often. This plug-in takes up about as small amount of processing power as you could ask for...

While free, I don't believe that the SmartElectronix Phase 90 has too much to bring to the table. While it's worth getting if you have a compatible system since it is free, it doesn't have too realistic of a sound quality. It's also limited in the parameters and control that it offers. While it's simple, free, and doesn't take up much processing power, there are better plug-ins out there that are free as well. I would however, recommend trying it out for yourself if you're able, as other users might be able to get something more out of it than I was able to.
Did you find this review helpful?yesno
»