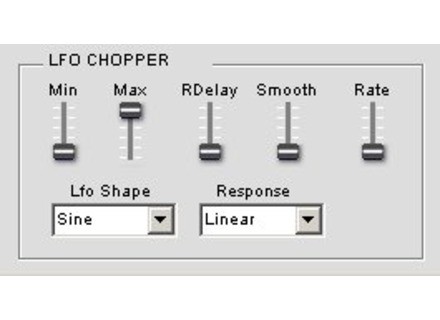 Oli Larkin LFO Chopper
3
The Oli Larkin LFO chopper is a free vst plugin that will work for your window’s computers. I ran this will FL studio 8xxl about a year ago. I have no complaints with this, it worked fine and takes up no cpu. The Vst itself is pretty plain though, no bells and whistles just straight forwared. No need for a manual and if you did need one I don’t think you could get one, this is a free software vst that you download anywhere on line and you wont find a manual for it.

The Oli Larkin LFO chopper is similar to tremolo plug ins and works with a bunch of different LFO wav forms. There are only a few sliders on this vst and they are minimum and maximum amplitude, delay, smoothing. that’s about it, like I said its extremely straight forward and easy to use. But the Oli Larking LFO chopper isn’t the only vst like this on the free market. So if you need something similar to this, although this is a great freeware vst, I suggest checking with kvr audio and seeing what other plug ins they have available that are close to this one, or google it on the web because this is not something that is up high on the plug in vst chain.

Overall this is a great vst though and the best part is that its free, and we all love free. But with free you get what you get. So be prepared for a plain vst, not to say it doesn’t work good because it does, it actually works great its just not pretty to look at. I have not used it in any other software besides FL Studio so I can’t say wether or not it works with other popular programs. But as long as you are running windows you should be ok. But give it a shot , its free and if you don’t like it you can try some other vst’s that can do the same thing.

Oli Larkin LFO Chopper
4
Oli Larkin's LFO Chopper is a free VST plug-in for Windows operating systems. It's basically a tremolo plug that works with a variety of different LFO waveforms. Unfortunately, the scope of those who will be able to use the plug-in is limited since it's only compatible with Windows and those DAW's that support VST plug-ins. The good news is that those who can indeed use it will get it free, as it's available as a straight download from the Oli Larkin website. Once you download it, you should be able to have it up and working for you within about a minute or so. There also isn't much of a learning curve with it since it's only got a few parameters to adjust. That includes sliders for minimum and maximum amplitude, delay, smoothing, and the rate at which you'd like it to function at. It also gives you the ability to set your LFO waveform shape and the type of response you'd like. I doubt a manual was made for this, nor should one be necessary.

While I don't have a compatible system to run the Oli Larkin LFO Chopper anymore, when I did it was in Cubase SX on a Hewlett Packard Pavilion dv8000 Notebook computer. The computer had a 3.0 Ghz processor and 2 GB of RAM, which was enough for me to run what I needed to at the time, including this plug-in without any issues at all. I would be surprised to hear if other users had issues running this...

Oli Larkin's LFO Chopper is one that should definitely be had by those who have a compatible system being that it's free and pretty effective. It's a unique take on a classic effect, as is the case with a lot of the Oli Larkin plug-ins. I like the controls presented here as they're not your everyday tremolo controls. The sound is pretty good but nothing too incredible, although it will certainly get the job done, especially considering that those who have a Windows and VST based system probably don't have a plethora of high quality plug-ins to work with. Regardless of what you might have, it's absolutely worth it to add the Oli Larkin LFO Chopper to the mix if your system will permit you to...
Did you find this review helpful?yesno
»