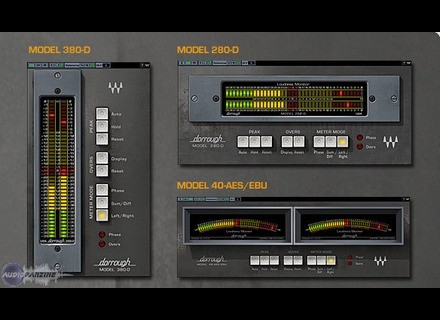 Waves Dorrough Meter Collection
4
The Waves Dorrough Meter Collection is a bundle of different frequency analyzing plugins. What makes these special is that they're modeled after extremely famous hardware made by the company Dorrough Electronics. For the past few decades, it was Dorrough that ruled the world in hardware monitoring devices, and considering everything is going digital today, it was only natural for someone to clone the hardware, and what better manufacturer out there than Waves? There are two different versions out there -- the stereo version and the surround version. This review will mainly deal with the stereo version. The package comes with the 280D, 380D and 40-AES/EBU plugins. In reality, they're all basically the same plugin, but they look different. Waves offers different styles for those of you who are used to visually seeing audio in vertical, horizontal or arc form. I never read the manual, but it's not needed with this device. There are a few buttons that'll allow you to hold the analyzer at the peak, reset it, change the phase and adjust the left/right channels to accurately monitor loudness.

The plugins themselves are super simple to use. The moment you pop it into whatever bus you want, you'll easily get the hang of it. Thankfully, most Waves plugins are like this, which is a big plus for anybody considering buying other bundles offered by Waves. The plugins work for both PC and Mac, so the only people really left out would be the Linux guys. The gear has never crashed on me, and that's always been a good thing about Waves plugins. They're pretty much rock stable.

These are a good alternative to those who find their current DAW monitoring programs to be lacking. Most of today's professional DAWs don't really need these, but some of the cheaper ones could benefit with the use of these plugins. It's featured in the Mercury bundle, so if you decide to get basically everything that Waves offers, these will be included. If you just want these and want to save some money, get the Dorrough Meter Collection. It'll be much cheaper.

Waves Dorrough Meter Collection
5
The Waves Dorrough Meter Collection is a plug-in with three different loudness monitors. Included in the bundle are the Model 280-D, Model 380-D, and Model 40-AES/EBU plug-ins, each of which just gives you a different look on the same loudness meter. Each has stereo 'LED' levelers and a series of buttons for controlling exactly what you're monitoring. You can buy this plug-in individually or within a bundle, and also comes in a Surround Edition. It's not hard to use these plug-ins at all, as once you find the settings you like or need, it'll pretty much do the work for you. There are a good amount of mode buttons to work with, so a manual should help with identifying exactly what everything will do for you.

The studio I work at has the Waves Dorrough Meter Collection running on all of our systems. The plug-ins do get used a good amount as they really are great meter monitoring tools. All our systems are Pro Tools HD based, but it should run well either way since you're mostly going to be running just a single instance of it on the master fader, or at least that's how I use it. Performance should definitely not be much of a problem with the Dorrough Meter Collection.

The Waves Dorrough Meter Collection is one of the best ways to monitor your loudness levels inside the box. They're designed for use beyond just mixing and mastering audio, but also for post production and just about any audio application you can think of. It's cool that they also have the Surround Edition, which would of course be best suited for mixing to film. I haven't used this version, but I'd imagine it's pretty comparable and just has more meters to check out. It's not one of Waves' more expensive plug-ins, which is good for anyone who wants it! It's available in both Native and TDM formats, so definitely look into this if you're after a well designed loudness meter!
Did you find this review helpful?yesno
»