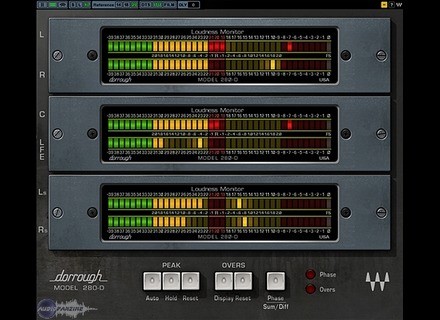 Waves Dorrough Meter Collection  Surround Edition
4
The Waves Dorrough Meter Collection is a bundle of different frequency analyzing plugins. What makes these special is that they're modeled after extremely famous hardware made by the company Dorrough Electronics. For the past few decades, it was Dorrough that ruled the world in hardware monitoring devices, and considering everything is going digital today, it was only natural for someone to clone the hardware, and what better manufacturer out there than Waves? There are two different versions out there -- the stereo version and the surround version. This review will mainly deal with the surround version.

This comes with the 280-D, 380-D, 40-AES/EBU and a Sum & Difference/Phase meter. The biggest difference between this and the stereo version is that these are more meant for movie soundtracks. Despite all of today's technology, people people still listen to music in stereo. We also write in stereo, so the 5.1 plugins don't exactly apply to most musicians out there. Those working for Pixar, however, will find these especially useful.

The plugins themselves are super simple to use. The moment you pop it into whatever bus you want, you'll easily get the hang of it. Thankfully, most Waves plugins are like this, which is a big plus for anybody considering buying other bundles offered by Waves. The plugins work for both PC and Mac, so the only people really left out would be the Linux guys. The gear has never crashed on me, and that's always been a good thing about Waves plugins. They're pretty much rock stable.

These are harder to judge as they're not really meant for guitars. You can use them for music, but it's more meant for movie soundtracks and the such. They're set up for 5.0 and 5.1, after all. Because of that, I don't use them much at all. It'll only be the occasional usage when I'm dealing with something in Final Cut Pro or something. They're a bit hard to recommend for musicians, but if you're dealing with movies and motion pictures, check this out.
Did you find this review helpful?yesno
»