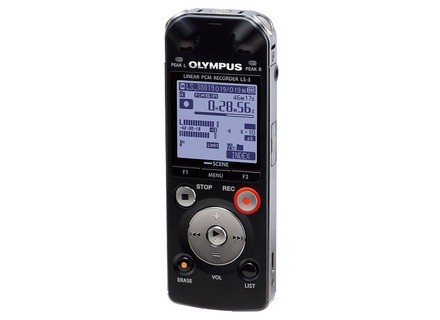 Olympus LS-3
5
I just discovered this little device that gives a lot for its size.

I compare it now with a Sony PCM M10.

I still have a Sony handy voice recorder of the same size ref: UX200 there is always with you.
It is this philosophy that I bought but made a disappointing Pocketrack Yamaha C24, which I gave my opinion on this forum.

The new LS-3 is the replacement according to the Olympus LS-11, we integrate different functions such as + the ability to zoom (roughly 180 ° to 30 °, 90 ° off mode), which reduces the stereo effect but also the ambient noise, it is more in the audiophile, but it's convenient for the interview.
Can not describe it in all its functions, he recorded 96kHz/24bit cfm.
It has all sorts of possibilities for connections that are generally needed.
Its screen is very readable as the Sony + M10, although smaller.
He owned three pickups AB 2x + 1 omni that can be mounted or removed.
We can add a micro-sd.
He can be added for a cheap Rycote C24 WWJ.
He has a good sized speaker that has nothing to envy other handheld recorders.
HE SPEAKS, actually a female voice as a GPS describes the evolution in the different menus, you can remove the voice of goods.
One possibility to charge via USB the included Nimh 2.
It has a tripod socket.
Its batteries do hold for more than 20 hours recording, 30h read.
2 LEDs indicate exceeding 0db
We can filter the recording and reading what I've seen better on my little recorder.

In short, very comprehensive and seems very close to the LS-11 tests.
It keeps the sound a little metallic LS-11, most in the treble.
I compare it to the Sony PCM-M10 for 24 hours, in the chirping of birds, the M10 is more bearable, in other cases the LS-3 seems to sound more defined.
The LS-3 gives more than the Sony PCM M10 has a more muffled sound more natural but in the end. Impossible to separate them for now.
He has not the qualities of a Fostex FR2 The nor probably those of the new Roland R26, well as testing the sound was different he is doing pretty well as a recorder to do everything.

I am not disappointed with my purchase, I'll keep this device on me for which I will find a hard case to its size, but to have strong incentives to its miniaturization take care.

This is the unit that focuses on self and that we forget to find it quickly when needed.
Very good value for money, this is also the price of miniaturization.