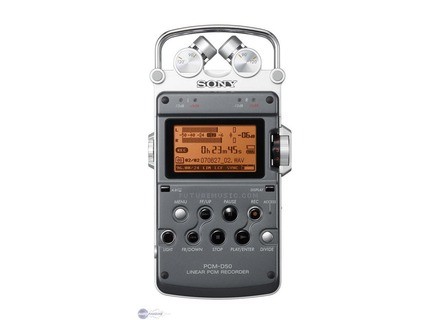 PCM-D50, Pocket Recorder/Multitrack from Sony in the PCM series.

Sony PCM-D50
1
I use this attached to the mixer board and record a duo.
Can't find any pros for this product as it will not turn on now. Used it for 3 years and it slowly had problems turning on. I have seen other reviews, on other boards, and it seems at least 100 people have had exactly the same problem. All Sony will say is, send in for repair, this would mean sending it to Toronto and I understand cost is prohibitive. Most likely they change to a board that they have fixed the problem and they make another $350.00 !!!!
I will never buy Sony again. The Tascam looks as good and at 1/2 price.

Sony PCM-D50
1
For the same cot obliged to buy something rcent rather than paying a rparation expedition package etc! super balls but his one day no longer lights: power supply, battery or not
trash can? ben shit Sony will reimburse us for we are many s'tre been had I think !!
and if ptitionnait? then buy what's quivalente quality in the current offer?
Did you find this review helpful?yesno
»

Sony PCM-D50
5
So Me, I have not had the same experience as the other because I bought mine used already damaged after a fall there are more than 3 years. to be honest, I thought it would take one year (made in China); meantime, he again several falls (one of more than 2 meters during a concert recording) with multiple batteries faith ejected by the impact and landed in micro water while hiking with water that is introduced to behind the LCD for several months ... I carry around the bottom of my backpack wherever I go all this time and I used to work the same (thing I never thought with a recorder - 300 euros OCCAZ just bought troubleshooting)! ! ! Well since its swimming, the only bug that is an output of the menus when I press too much on "backtracking" which is not very troublesome. Another colleague has one and it was super surprised at the quality and reliability of this recorder. Two other friends also have the PCM and M10 are also telling great.

Micro side, there can be made a less flattering than a H4N but a much higher precision that gives a lot of flexibility to mix.

Even without balanced inputs, microphone preamps are well above those of H4. This recorder has a rather exceptional signal to noise ratio for the price. (Just to make gaff mobile phones too close during a capture).


His only serious competitor now remains in my opinion the Olympus LS100 which can be made a more "musical".

For cons, I bought this PCM D50 recorder troubleshooting following the spontaneous stop at the end of filming (hopefully) a Fostex FR2 ...! ! ! And there is more in the same class! Repairs amounted to the price of a new PCM D50! ! ! (After I have never had as good a Fostex FR2 recorder that but I think I will take that as Sony even without problem if there actually has bug on some devices, for what cashed mine ; it will anyway

In short, if you are disgusted with Sony, it might be worse with others more expensive

Sony PCM-D50
For the same cost required to purchase a recent thing rather than pay a compensation package shipping etc! super balls but his one day no longer lights: power supply, battery or not
trash? ben shit Sony should pay us because we are likely to think I cheated!
and if we petitioning? then buy anything of equivalent quality in the current offer?

Did you find this review helpful?yesno
»
Read the 17 user reviews on the Sony PCM-D50 »