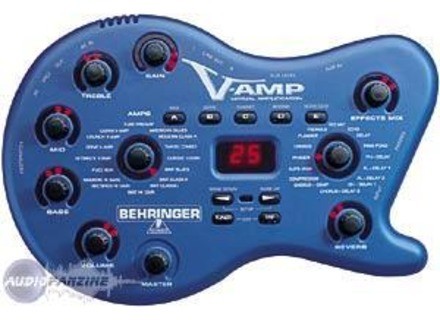 
6 user reviews
Find it in the classifieds starting at $66 Avg used price: $50

First i'll start with one thing,where's the power switch?it's a real pain in the ass to unplug this device everytime your done playing it.Then there's the drive power(where is it)distortion sounds like im playing through a $5 amp.I really hate the fact that its useless with 95 % of ams on the market.They have only one input and the ones with 2 are not equal.so the only way to bennifit from the two channels of your product is to use 2 amps like i do.

Construction and design are great,if they spent as much time on the sound and the other flaws as they did on the design concept they might have gotten some where.Also what did the do different on the v-amp 2 has all the same options as mine.

I use mine daily and found ways to compensate for it's flaws.I run my guitar to the v-amp then run the left output to a crate gx-65 and the right output to a peavey backstage plus and the headphone output to my pc for recording.I use the v-amp for vocal effects as well and its great for that.But if your on a budget this is for you but i wish i ciuld have gotten the line 6

Behringer V-Amp
5
Purchased from the Guitar Center for $129. My goal is to branch out into home recording (on a low budget approach). I currently have a Marshall practice amp with limited "tricks" (but sounds great) and wanted to experience the sound and feel of numerous effects without the heavy pricetag of individual effects hardware.

Besides the unit itself, this came with a storage/carry bag and a foot pedal (all for $129!). First time use was amazing. I suppose for the purists, there's nothing like the real deal, but I was blown away by the vast array of sounds available. It'll take a while to work thru all the possibilities, I'm especially looking forward to building some personal presets with different cab/amp combinations.

At this point, I can't think of anything I don't care for. If it holds up, I'll be grinnin'.

Before I bought, I read a number of concerns about build quality. Looks plenty rugged to me. No gripes here.

What a boot in the pants for little cash. Now I just need to learn all the various capabilities.

Pv44's review (This content has been automatically translated from French)

Behringer V-Amp
5
The most part of the effects pedals are found in the V-amp 2. In addition, they are better.
The main advantage is being able to connect an electric guitar and a headphone and be able to play all existing sounds (Dire Straits ACDC through the funky jazz, dance ...).
Although if sr and more on the industry (like me) on a micro computer, then l is even better because with the Internet can Tlcharger dozens and dozens of sounds and incorporate them into the V -Amp 2. It really is the feet.
In my case, I plug my Gibson Lespaul and I play (without emmer neighbors ..) in the garden or in a pice of the house.

The manual is simple. The only problem is when you want to discovering new sounds via the Internet and thus a micro computer. We must go to the website of Berhinger Tlcharger and a small ad hoc program to operate with a microphone. Once the manip connate, the PIE D. Before I had a Gibson with my marshall 100 w lamps and the problem is that for the sound of my guitar prfrs had to play hard and the more I sound marshall only (dj c'tait not bad). L I can play softly and get sound Hendrix, Deep Purple, even with a Gibson, then the computer Bravo).

Some effects are a blast and are unbearable for the fun and show the extraordinary powers of the V-amp. If anything wrong, everything is OK.
The vritable problem now is to keep its good because we love all the sounds are great and 95% must choose.

I've had 10 days and I can not do without. What's great is that it is very small and that for my next vacation I take him with me if Gibson enters the car.
I have not tried other models. The seller told me that I was a great buy (+ 200 €). I trusted him ... and now I must find my old age (43) ct of Nantes to oxen and one can have fun.
a +
Did you find this review helpful?yesno
»

koak38's review (This content has been automatically translated from French)

Relatively simple to use even if the manual is very helpful at first to recognize the type of amp and to access certain menus (noise gate ...).
If not, we understand very quickly the fonctionnemnet (more than other products of its kind).

I bought it, telling me that I will change probabelment later for something better but I do not separate more. However, I do serves as certain types of amp and effect:
- "Rectified" for fat distortion with the compressor
- "Tube preamp" with a bit of reverb (reverb attention to ... it increases the sound funny) to vintage rock sounds.
- "Clean" for clean sounds christallins (not great though)
- The others are a little rough
The effects are good but should not ask too much.

I use it with a Gibson "The Paul II" (I love) and a tube preamp "tubeman". With that I sound a madman (both vintage and modern ...).
I use it to record but also on stage as it adds sustain and gain dégueux not.

PBS: - not used alone on stage (too small and difficult to use
- The damn switch (pedal) with a latency to move from one sound to another
- No possibility to store your own sounds

I use the amp for 3 years V
I have tried many of the same type and c the best value for money (ah behringer)
if I loose, I buy the head V-tone, it sends and I really trusted behringer since.
Did you find this review helpful?yesno
»
Read the 6 user reviews on the Behringer V-Amp »

See all 23 photos of Behringer V-Amp »