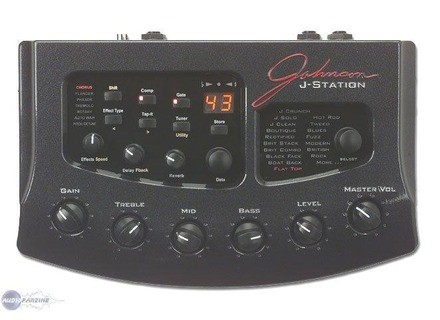 Johnson Amplification J-Station
5
I got this baby at Sam Ash in New York City. I paid $150, but you can pick it up for $99 now since it dropped price.

Everything. Huge range of effects and it can model so many amps, it's amazing. I like it better than the POD because you can edit it on the fly with your computer, and it is really easy to use. It comes with 30 factory presets and 30 user-defined presets that you can create or edit whenever you feel the need to do so.

The auto-wah. When you're looking for a wah pedal, get a wah pedal and not auto-wah. Especially on this unit because it is cheaply made. But that is the only gripe I have about this whole unit.

It is built solid, in a metal casing unlike several other guitar processors, like DigiTech or POD.

I really like this thing, and I'm going to buy the foot board for it because it screams to be played live.

Johnson Amplification J-Station
2
I paid $149.00 for the unit after renting two others at various times from a local vendor.

I was trying to get the POD on the cheap and of course loved the price. You can get some great sounds from it. The factory patches are all very over-done (too much FX - too much compression). It's very easy to hook-up to the PC and use the software included. With the unit I rented I had a foot controller with integrated 2 multi-function pedal for a while and it was great for live situations.

I've never read a review that stated this, but I will, IT'S THE SOUND ! At first I thought "cool - this thing's great"... I got lots of nice crunchy sounds from it... just don't try to get a nice clean acoustic sound. Even with no effects (on all three units I've used) there is what I call an "aftersound" - a distorted low level hum that lasts just a few milliseconds after each note you hit. After I figured this out I noticed it was there on the crunchy sounds too. Like I said - I've used three of these and have had the same issue with all three. I know for sure I never want to record anything with this unit - it may be OK for live situations - but I'm going to have to buy a POD.

Construction is good - you can probably get away with dropping it once or twice. Why don't they make these things rack mountable (is that a word? - it should be) ? Why does the manufacturer of both the POD and this unit think that having a device shaped like a space ship is better than making it rack-able ?

Johnson Amplification J-Station
2
I bought this because our bassist quit and a new guitarist joined so I needed a bass; fast. I went to a local music store and pay about $175 for this bass I think.

It's a really good beginner bass but it doesn't last long. I had it for about a year and it's starting to mess up. It's deffinately good.

It starts to wear out fast. The strings don't stay in tune and the neck dries up fast. It was a definately good begginer bass. sometimes the pickups didn't work.

It's a good bass for begginers but if you can go higher. I liked it at first but if you get good you don't like it anymore.

Johnson Amplification J-Station
4
I purchased from Musician's Friend magazine, and paid 150 bucks for it. I needed something for direct recording into my computer for my guitar students as well as scratch tracks for my band.

Some of the distortions as well as the cleans are pretty darn good with some tweaking. I really suggest getting the software for your computer to do the tweaking.

I don't think it's as versatile as they would like you to think. Many of the sounds are still quite processed, but what do you expect for 150 bucks?

The unit is sturdy although not quite as hardcore as the POD.

I recommend this unit for a few distortions and a couple of clean sounds. Not a ton of effects, but enough to utilize the unit. More high end than to POD for those of us who have lost that over the years. And you can't go wrong with the price. Again, in my opinion, better used for computer tweaking and recording than for live use. Not really intended for that anyway, I have to think.

This review was originally published on http://www.musicgearreview.com
Did you find this review helpful?yesno
»
Read the 20 user reviews on the Johnson Amplification J-Station »