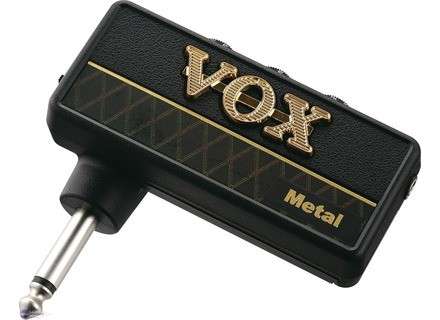 Vox amPlug Metal
5
All of these pocket amps from Vox have their specific applications and this one geared specifically towards the metal lovers. So the California metal tones are what this unit is modeled off of, which I'm guessing is Mesa Boogie. So if you hear this thing you can get that overly saturated gain structure. It has a midcut circuit that drops the midrange out for that low voicing.

It actually is amazing to me how they are able to fit something like this in the size of a watch. Vox metal will get you a good Megadeth tone or something comperable in that type of metal genre. This isn't isn't 80's glam metal tones or even hard rock tones. This is all out balls to wall metal, and you won't get that tone either.

If you are going to use this version over the other Vox pocket amps then you are going to need a humbucker style guitar. It is voiced for the low end so a single coil guitar like a Fender Stratocaster isn't going to cut it in any way. Sure you can play through it and it will sound fine but I would suggest the Lead version if you are going for the single coil operation. There you will get more of a yngwie malmsteen type tone. Or even the Joe Satrinani version with be better suited for thinner guitars or single coils. Any guitar will work if you are just wanting to jam but I find these setting to be the best for each version.

If you need a pint size amp that fits in your pocket and goes where you and then this is for you. You can toss it in your drawer at work or at home and quietly jam with some headphones quietly without disturbing anyone else around you.

At new these units come in at around $40 which is a great price for a finger amp. This is a practice tool and not be able to use in any gig. You can hook it up to your computer and get some cool sounds with other effects units and such. Nice little buy!.

Vox amPlug Metal
3
This is a headphone amplifier that plugs directly into your guitar, with a headphone out and a a few controls. This particular model is the "Lead" model, which has a tone specifically for playing soaring leads. This is actually a decent piece of gear for rehearsal, assuming volume is an issue (which for most people with families and roomates, it is). It's a digital technology. The gear isn't complex enough to be edited with computer or controlled with midi. It's not rackable. There is simply a 1/4" cable head that plugs directly into the guitar, and a headphone out.

This thing couldn't be easier to use, just plug it into the guitar and plug in the headphones. Then adjust for volume and gain. There is also a digital delay effect that makes your leads sound way huger. There's really no variety which is a bummer, and part of the reason that this is a rather limiting device.

This thing will sound good enough through your headphones to get you through the practice session, assuming of course that lead guitar is all you are going to be playing. Especially since only hard rock and metal lead tones are possible with it. The quality of the sound depends entirely what you expect of it. I would hope that I could do more than just get a decent lead sound, so I wasn't impressed. I couldn't motivate myself to do anything but shred when I used this thing. I would say that if that's all you care about, you might be really interested, especially since you probably have a lot of complaints from neighbors and family members about the noise that you undoubtedly create. I'd say if you have any interest in groove, tonal character, or anything resembling real amplifiers, this is not for you. It's certainly not for me.

I like the idea of headphone amps, but only a few of them are really worth getting, as most simply have one real tone and do that and nothing more. This is an example of the latter case. Shredders only need apply, unless you feel like buying the whole Vox series and switching them out as you see fit. I certainly don't have any interest in doing that, so I'd say that I would rather use a smaller practice amp and try to compromise with the annoyed roomates.

I haven't tested it yet with multimedia speakers.

It's very nice but you won't sleep a lot because you'll spend all night playing your favorite heavy metal riffs...

Ultra easy, no need for a user's manual. You get a huge distortion with your headphones... and I haven't changed the first batteries I installed. I normally set the gain and tone controls to max and the master volume to 2 or 3.

The sound with headphones is very loud and you won't hear the sound of your TV.

I also took it with me to try out a secondhand guitar at a cafÃ©... very convenient.

The device is faithful to the guitar you're using. Excellent!

It's not very expensive so don't expect an exceptional sound, but it's enough to get a good feeling.

I've been using it for two months and I haven't changed the batteries. I don't use it every day but when I plug it in I play for hours.

It's very convenient and you won't have problems anymore with your family and your neighbors.

I hesitated a long time before buying it. It looks like a toy but watch out for your ears... It's a good purchase for people who play a lot and don't want to disturb their environment.

There are also a classic rock and a clean version available...

I give it an 8 because perfection doesn't exist...
Did you find this review helpful?yesno
»

Js67's review (This content has been automatically translated from French)" Bought is thrown ..."

As I play a lot and do not want to disturb my family, I bought the Vox AC 30, which quickly broke down. Thought to have been unlucky (or poorly designed models + fragile it can happen in a series), I stayed true to Vox Amplug investing this time in a Heavy model. Race results after a few weeks, the amPlug starts to spit and that's it, it's out more sound for guitar and music from my MP3 (entry to) pass so chopped. In short, the little toy is unusable!

One word: it's a gadget completely in the zeitgeist of disposable and planned obsolescence. All for it ... what a waste of marketing for twenty hours of play at most ...

This time it's decided, we'll catch me most, even occasion!

Did you find this review helpful?yesno
»
Read the 20 user reviews on the Vox amPlug Metal »

Other names: am plug metal, amplugmetal