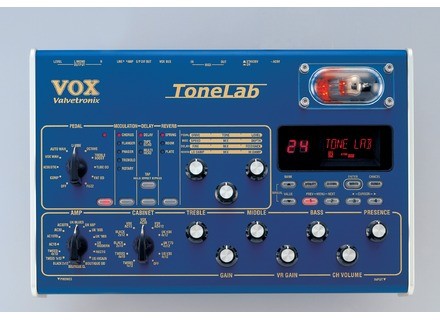 Vox Tonelab
3
This is a digital amp modeler. This thing cannot, unfortunately, be updated through a Mac or PC, however a MIDI controller can be purchased to control it more efficiently. This unit is not rackable. It has MIDI connections as well as a 1/4" input and output, and comes with a power adapter, though I'm not sure off the top of my head what voltage it is. This thing models a wide variety of amplifiers, mostly of the tube variety but with a few solid-state thrown in for good measure.

I don't think that there is much difference in quality between guitars with this guy. This is mainly because I don't think it sounds very good in particular. Of course, it's better than most affordable plug-in amp modelers, and it's better than the average outboard amp modeler also. But I've always felt that those machines were lacking. I would only recommend this for those who, for whatever reason, can only record direct.

I like the ease with which one can find a tone that they like, and I also like a few of the amp imitations as they aren't too bad. But for the most part, this hasn't done anything to shake my stubborn anti-digital amp stance. Only the insanely expensive plugins have really worked for me, and even then, they were only impressive when recorded with other MIDI or digital instruments. If this is what you plan on doing, try it before you buy it, because I'm not sure it's the best way to go.

Vox Tonelab
4
This is a digital amp modeler. I don't think that it can be edited through a Mac or a PC. It's also not MIDI-controllable. The device isn't rackable, the knobs are all on top. It's a completely digital technology. there are basic 1/4" connections.

These digital amp modelers have gotten easier and easier to use over the years, and this one isn't really an exception. It's pretty easy to find the tone you're looking for, as they are all pretty easily labeled. Even if you're not a hundred percent sure, it's easy to surf through all of the tones pretty quickly. Using the effects isn't too hard either, it seems like there is an intimidating number of knobs but closer inspection reveals that they are all pretty basic. The manual will explain everything to anyone who doesn't fully grasp what the modeler is capable of doing.

I have a bit of a problem with these types of machines, but I'm not sure that my views are shared. I'd heard that this was a good amp modeler for clean tones. When I tried it, I hated it. I realized that most people who say that are probably looking for a supremely clean sound, and not a hint of dirt or overdrive. I like to get at least a little bit of those things from my clean tones, as I play R&B and blues. I was disappointed with this modeler for that reason, there wasn't an acceptable compromise for the clean tones. They all ended up being either too clean or too dirty. As for the dirty tones, I wasn't getting goosebumps the way that I do when really rocking a tube or solid state amp, or even a good digital amp. They imitate classic amp sounds like the Marshall Stack, or the Mesa/Boogie rectifier. I think they do a rather cheap imitation at that, they aren't really capable of delivering the goods.

I'm not sure why I keep buying these things, maybe because I'm a college student and can't record acoustically very much. I certainly can't crank up my amp and let it rip. Therefore, I must say that if you're in my situation and you aren't a complete tone freak like me, you might be happy with this. Realize, though, that you'll be more than likely to get frustrated with it. These things don't necessarily improve with age. In fact, they're constantly being updated. So be cautious when purchasing.
Did you find this review helpful?yesno
»

Vox Tonelab
5
This amp simulator is distinguished from the others by the fact that it uses a tube to help produce its sound. It models most every classic amp and speaker combination in the book. It also has all the basic effects you would expect. It has room for 96 user presets. It can be used for direct recording or in front of an amp. It is very solid, well built and cool looking. The SE and LE versions are fundamentally the same thing in foot pedal form but take up more realesate.

The Vox Tonelab is very easy to use thanks to its user friendly knobs and clear layout. This is truly refreshing if you have ever experienced the nightmare of multifunction buttons and menu based layouts. The manual is very good at describing the original amps and history and can help because the different amp models require different approaches to the tone knobs due to the differences in the tone knobs of the original amps. The unit is the right size for what it does and sits nicely next to your computer. Storing, naming and recalling presets is easy. Its a great design.

This device is in fact extremely educational because the models actually sound like the amps and speakers they are modeling. I've owned various amps with various output tube types and speaker combinations and these models nail them as well as one could expect from a digital model(unless something else comes along and surprises me). Some of the detail of the models is truly remarkable like the rectifier sag you can actually hear in the cranked vintage tweed Fender model for example. The Vox AC15 and AC30 models sound particularly good. The sound and tweakability of the effects section is simply adequate and not as strong in quality as the models.

I love the sound of a great simple tube amp. Digital modeling always sounds kinda bad to me. However I picked this unit because I felt it sounded less artificial than the Pod. Pod products have an artificial sound to them I simply don't like. Digital modelers always sound cold and sterile relative to a good tube amp but offer some great advantages in terms of ease. This unit makes it easy to record a wide variety of great sounding amp/effect sounds quickly and cleanly. These modelers also seem to naturally compress and somehow eq on their own well when recorded compared to a real amp and this contributes to the ease of using them for recording. I use mine for writing in the studio and its great for that but I would probably never use it on a final recording for the public to hear. However in certain contexts one would probably be unable to know if one was hearing a model or the real thing. My favorite things about the Vox Tonelab are its user friendly design, sturdiness and lack of artificial coloring to the sound. And it looks far out!

EddyA's review (This content has been automatically translated from French)

It is very easy to use. Read the manual (which is very well done by matter) is not essential but recommended! The edition of the sounds is a dconcertante ease, it's not even funny

The sounds are very warm, powerful and dtaills. Nothing wrong, even the distorses are nikelles! I often saves models and I do all my grates with the same simulator.

It's been 6 months since I use it. If you had to make another choice, would it without hesitation. For models, it really is THE possder simulator. After, you need a good sound card and a good PC for derriere (For my part I am working on CuBase with Eridol FA-66). I do not use it on amp, so I can not say anything about it.
Did you find this review helpful?yesno
»
Read the 42 user reviews on the Vox Tonelab »

Vox Tonelab manuals and other files