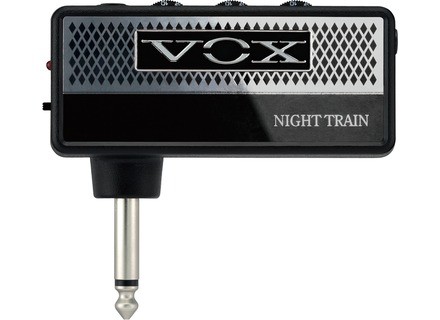 Vox amPlug Night Train
5
Small pre-amp headphone equipped with a jack that plugs directly into the guitar, different setting: volume, tone, gain. It also has a headphone jack and an auxiliary input for plugging in an external device. One button on / off function and "FX". The "we" is the "bright" amp's Night Train, and "FX" is the "Thick" (an overdrive boost)
Uses 2 x LR3 with a duration of approximately 20h, it is very light

it works as an amplifier, it is very easy to use

I tested it first on a small firm sold Vox to put just the Amplug ... there, the first notes in his clear, I am "wow". it goes directly into the emotions, the heart begins to beat the heat rising, it's feeling, you feel immediately that this one ... it will be really good!

It has a very good audio performance, very powerful compared to twin with whom I could turn up the volume almost to the bottom clean for headphone listening, one feels that there should not push it too because we're not sure the small firm will withstand ...

and then rises slowly gain ... great, the sound can seem almost similar to the Twin, but it is rounder, softer, to exaggerate I'd say "less acidic" but frankly I'm exaggerating to give the impression that because Twin acid is not the same. But Night Train is really rounder, a little warmer.

It reaches the end of a nice winning race overdrive that's good to hear. After it goes into the "FX" (thick) and climb again to the overdrive distortion, it's good, that's fine ... although I'm not a fan of distortion, but it looks really good. AND ... no breath (as the AC30), there is nickel! Maybe a little breath of the firm, but it comes from him, and honestly ... I remember having heard, I was captivated by the sound ...

Then test small speakers amplify 40W connected via the headphone jack ... Wowow ... even better than the firm (at the same time it is normal), too good!
Last test with headphones for checking carefully ... Magic! As said in a comment webmarchand "makes you want to buy the real" ... yes ... except that it is much cheaper and it fits in your pocket:-P
I also connected to the auxiliary input of my amp to see and it sounds great.

When the overdrive is Amplug-saturation, it responds well to pick attack, you will have less saturation if you attack the strings gently, and you will thoroughly saturated (that you previously set) if you go frankly.
Attention, however the manic sound identical "before and after", it is undeniable that the machine eats a little treble, and grows more mediums. Me it does not bother me, I rarely use the bridge pickup because I prefer its less acute, and suddenly, there I can play bridge pickup without being bothered, just to add a little treble if I want.

I connected upstream of overdrive pedals (Boss BD-2 Blues Driver, Boss OD-3 Overdrive, Boss DN-2, and T-rex tonebug overdrive) to see how he took his clear external pedals, j I found the concluding try. But I said that was the Amplug clear sound, and I put my pedal not fully, but rather in "overdrive light" .. It is sure that if you swing the sauce, I do not guarantee a beautiful result, must know how to balance ... and I have no big distortion, then up to you.

I listened to samples of this Amplug attracted me, and having tested the twin who had been placed on the market along with the Night Train, I said it just might be as good ... And yes! And OUIIIIII rather, it is really TOP!

It is a beautiful gem, with the Twin is really a step up from the output range that Vox had before (in comparison with those I have: the acoustic and AC30)! I love it! I had to buy new because I thought it was not used ... and I think it will be difficult to find occas, because when we buy, we want to keep!