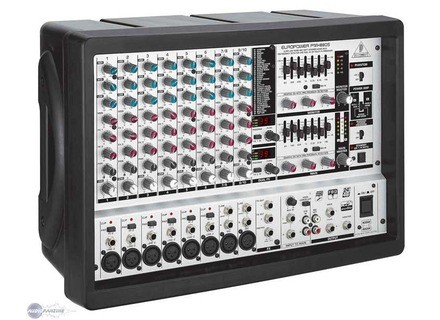 ditoflint's review (This content has been automatically translated from French)

Behringer Europower PMH880S
4
Hello, Let me tell you about the PMH880S. it's a console that I use for 1 year.
it possde esttique a sober, the buttons are well ennsemble laboris, its connectivity is superb, the amplifier 2 x 400 watts is more than enough in most cases.

Behringer seems s'tre applied to develop a portable console robust, versatile and trs, you go back on the console all the CHARACTERISTICS of a much more expensive console, and Versatile is franhement surprising.

What I have AIM as this console is its ability to provide you with any arrangements prs little noise as possible to sing well, both in terms of its effect of two CONTRL you simultanment can apply! O well, its famous Systm CONTROL (feedback) the FBQ, for his entrespar (monithoring) its eight channels are two Stereo channels with either an XLR connector to tipe Jack o well 1 / 4, its 48 volt power fantme so you can power a microphone lectrt its legalization seven bands sound, everything is there, do not forget as I mentioned earlier, this console is stro.

I, for remarks against the cot rather sensitive buttons, I think Behringer should have to provide more effective care for the buttons provide a little more solid, have felt the touch, this aspect is somewhat nglig because when you move the buttons DIFFERENT, you feel it, as if there was an abnormal play, in short, apart from this fact I really have nothing to say ngatif on this console.

I was in my Possest, several other models of consoles over the years, so a console shure 100 watt RMS with reverb mcanique spring, a phonic I 1212A coupled with a DSP2024P but I confess that none of these solution n'gale the simplicity and robustness of my console PMH880S.

When the report qualitprix for $ 520.00 Canadian tax included, I have not seen much on the market that could compete with Behringer on this point, Hat! .

In any franhise, I have a word, ABSOLUTELY. And yes, yes, yes, I would do without this choice hsiter

Finally, I would add, Behringer has laid a portable console finely crafted, easy to use and powerful trs I possde Behringer EP1500 amp also so I used a coupled passive subwoofer 18 inch to accentuate my basses, and I CONTRL directly from my console is something I could not do before with my other products.