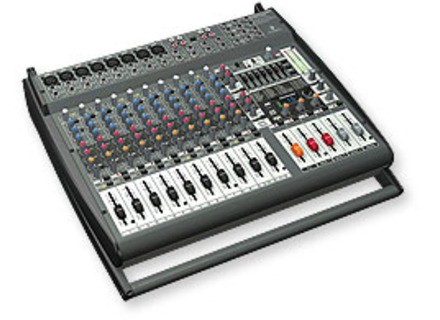 Europower PMP4000, Powered Mixer from Behringer in the Europower series.

Behringer Europower PMP4000
4
The PMP 4000 is a 16 channel powered mixer that is made for a table top. It cannot be racked and needs to be on a flat secure surface. For some situations this mixer was our best option depending on where we had to be. But in some situations it was not the best option, so we used it only for certain shows or events. All of the knobs and sliders are very well made though and you can easily tell that it was made with the best materials because nothing feels cheap or plastic like. The whole thing is not heavy but it seems to be made out of solid metal making it very sturdy.
There is a 3 Band EQ on each channel, but there is no compression. That is a deal breaker for some of the shows and events that I am at. There are some effects, they are pretty standard though and nothing that will really shock you. The EUROPOWER series of mixers has been great since the day they came out but for some reason it is like they do not put the essentials in the mixers for this line; like compression! The 3 Band EQ is decent and gives you a lot of control over the audio. There is also an LED Meter and phantom power. This whole mixer is pretty light, it weighs around 20 pounds which is very light.
The preamps that are built into the PMP 4000 and the whole EUROPOWER line of mixer is very good. You will have no need to use any other mic preamps because of how good these are. You can use any type of microphone with them and it will sound clean and sharp.
The effects that are built in are ok; there are a lot of them though. They are all 24 bit FX and you can use them on any of the 16 channels. But there are no effects that really stand out to me. Not saying they are bad, just nothing that makes say “wow”. But some people feel that the effects on the PMP 4000 are some of the best around.