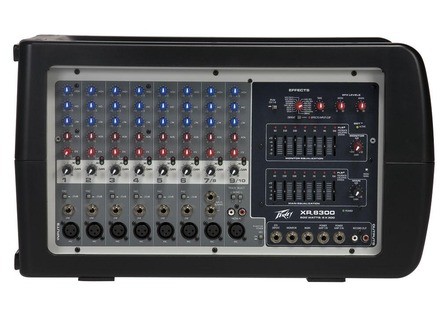 XR 8300, Powered Mixer from Peavey in the XR series.

Peavey XR 8300
5
For years Peavey has made powered mixers that are just all in one power houses. Play a BBQ, play a bar, the Peavey will offer all the power you need with a seperate power amp for monitors and mains.

I wanted a ton of power without having to buy 10 million separate things that I'll forget at home or leave at the gig. The Peavey seems to be in it's own 'semi-pro' class.

I spent $500 on this, but it has paid itself off with gigs. I can grab this, my laptop and some speakers and DJ a party. Throw in a guitar and a mic and you're ready for an acoustic show.

8 channels is perfect for a rock band.

The EQ has red LED lights for each frequency that let you know which frequency is feeding back.

Besides having 2 power amps you can also run a none powered monitor and main send if you have powered speakers or want to add more monitors.

Many times I've plugged my bass into this and played smaller gigs without a bass amp.

The preamps are So/So. But hey I've used some really nice boards with worse preamps.

I wouldn't buy this to use the effects. They are a bit over the top. Think of that as a bonus more than a selling point.

Rock solid! Peavey builds there gear to last. It's not pretty and most Peavey stuff weighs a ton, but there's a reason people still use the old Peavey stuff after all these years.

Peavey is a solid go to system to get you and your band a good sound for almost any live or practice situation.