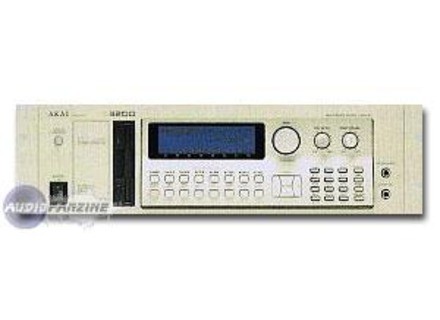 In Memory 2mo memory, I 8 via special memory card

config relatively simple, almost identical to the other samplers out multi brand that does not exist on this model

the manual is clear,

TOP edition is because the waveform is displayed quickly, the operations are currently available

I love this sampler but we must know by heart, otherwise it will be a bit complicated to get into the philosophy of the machine, but it is really worth

manual ... dense but not easy to find in French

converters: they were very good at the time. levels are boosted without being crushed.

tell the truth they have defects at the time, some enjoy the series converters.

Personally, I think it sounds because it works on a drum kit by exploiting eight separate outputs, inevitably ... ca tape!

the S3200 had IB304 filter ... optional on the S3000 and S3000 series XL. This card brings a lot to the sampler. Given the score card check that this one is inside! This is a good filter, but not transcendent, I would rather say enough typed.

The urban legend is that MOBY produced the album only play with this model ... I ca not be surprised and very abundantly used filter is fairly close to the famous IB 304 ...

dynamic: I would say it is legendary, but it is a very good machine. it makes me think of a Big bass woofer in a huge ... level suitable ca tears.

1 year
feature: speed to sample
least: we must learn, and that everything happens at once buttons ...

200 euros for the price, I have a AD converter rather correct SMPTE sync can be superfluous, however. Mine from a Paris studio that was used for dubbing or to SMPTE >>

an excellent sampler, rare, which in my throne rack stocked.

attention, updating the OS is quite tedious and find a ROM V2.0 for the S3200 is quite complicated unlike the S3200 XL

I have not compared the series of XL XL series. Strangely I prefer the XL series not (it does look as me)

Then, towards the S5000/S6000 series, they are more convenient if you do not know the series after 3000 ... it is not necessarily true when one has haitude working on it.

It's very strong, the power supply is well positioned, working circuit design is generally well done. It is understandable that ca was worth a small fortune at the time ... nothing as the weight of the beast.

It is a material that has limits (typed enough, use quite tedious at first, limited memory size). must know and accept the above.

After against a virtual sampler, I remain convinced that it works much faster with these old machines and the signal to noise ratio is much better!