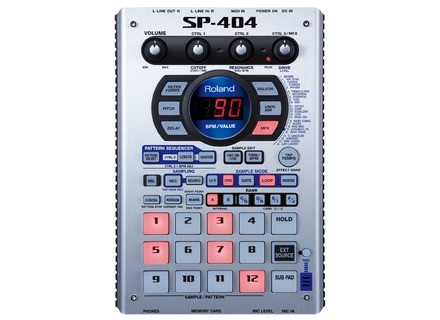 SP-404, Sampler from Roland in the SP series.

Roland SP-404
4
Have been playing acoustic and electric guitar for over 35 years, both professionally and as a hobby. Have a home recording studio and a home performance stage where we hold monthly house concerts. Play mostly jazz, light rock, and vintage country. Playing style: chord/melody, finger-picking; use thumbpick and Alaska picks on three fingers.

Purchased late November, 2005 by mailorder from Sweetwater. Price: $395, including shipping. Planned to use the device to trigger drum fills, intros, and endings in my one-man-band configuration. Also wanted to add a few sound effects. All of this is controlled by a foot pedal. The unit has met my expectations quite nicely.

The SP-404 has striking visual appeal: what appears to be a brushed aluminum finish with flashing amber buttons and a green pulsating light that flashes in time with the beat, or that just flashes when there is no beat. Nicely laid out control board; large buttons; well-labeled. I also like the fact that it is compact. Some might prefer a rack-mount version. Importantly, the manual is easy to follow, quite unlike some Roland manuals of years past.

I have not found a way to copy patches from one location to another and I do not think it has this capability. The internal memory is very limited and a couple of Flash cards will be needed for most users. You cannot turn off a sample while it is playing unless you first go to the Loop mode -- a minor hassle. The external mic jack accepts a quarter-inch plug; an XLR jack would have been nice also. These are not major complaints.

Build quality is first-rate. It feels light but solid. Controls will withstand normal-to-hard use. The most important thing is that the sampled sounds are outstanding; what you put in is what you get out -- no degradation of the signal that is perceptable. I am very satisfied in this regard and that is the main reason I am going to hang on to this unit.

The SP-404 really fills the bill as an entry-level and/or special-purpose sampler. After many experiences in using Roland equipment, it has helped to change my mind about Roland with regard to ease of use and decipherable manuals. On the one occasion I had to contact Roland customer service, the reponse was quick and informative (the call was about how to connect the SP to another MIDI device). In sum, I have no regrets about purchasing the SP-404. A happy camper.

This baby will shoot your music production speed to the roof!!

I'm using it for 3 months. No problem.

Fantastic sound! 24 bit! sampling from other media (cd, tapes) is very easy with superb quality. In-built miic usage not recommended. But there is an external mic input; use it for your field recording (battery operation!!)

Roland SP-404
5
Jam-packed for it's size and price, without making you jump through 500 button-combos. Everything is nearly self-explanatory, with a small bit of re-reading bits of the manual to &quot;get it&quot;. Light-up buttons make it great for a darker area, you can have the area around the LED pulse to the BPM. The effects are nice for a unit this price, controllability is easy, and you can throw it in and use the effects on inputs-in. Lots of banks, a huge improvement over the last 303. Built-in mic and of course- it's battery operated. Make beats on the bus. The &quot;sub pad&quot;, when hit, plays the last pad you hit on the 1-12 area. Perfect for rolls and doubling up. But I will say- I really really wish it had velocity-sensitive pads. I mean, this can be remedied by resampling your snares and such at lower volumes, but it's annoying. This thing is awesome for DJing though- whether used for live effects or sample triggering. Say you made a new track- throw it on and use it that night. The pads are crisp and hit on time. But watch out for the pitch- as usual, it sucks when pushed past the +/- 3 area. A very, very good multi-use machine, especially for the price.

Very easy. Pick it up and start hitting away. I figured out most of it within 20 minutes of tinkering with it.

Metal faceplate, rubber pads, plastic bottom. Haven't had many problems with it's durability yet, it has a semi-heavy feel to it. I was quite surprised by the quality feel of it, a major jump from the sp-303.

What more can you say? 44.1khz cd-quality sampling. It actually doesn't weaken down bass. Straight-sampling. You can also EQ while importing (helpful if you're importing directly without a mixer/anything else).

It's a great machine. Yes, you can make beats on it. But be warned- the sequencer blows hard. It sucks. It's best just to hit them live into something else. Other than the sequencer and the non-velocity-sensitive pads, it's a complete machine for sample triggering, looping, and basic effect-functions. Quality through and through, and can support up to 1gb compactflash cards.

steftroll's review (This content has been automatically translated from French)" well"

I edited on computer, the callage is not very precise

you can put 6h samples .... to swing sounds okay very well, but not to sequence

1 of 12 people found this review helpful

Did you find this review helpful?yesno
»
Read the 18 user reviews on the Roland SP-404 »

Roland SP-404 manuals and other files