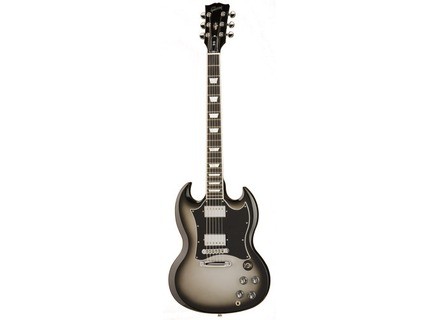 Gibson [Guitar of the Week #3] SG Standard
3
One of my favorite guitars have to the Gibson SG. One of my all time favorite bands plays this guitar exclusively. Well at least the lead guitar player plays an SG and if you don't know who I'm talking about it's AC/DC.

Angus Young has played an SG guitar for the entire career of the band as far as I know. If you want to get that classic rock AC/DC tone then I would suggest getting a solid sounding Gibson SG.

The old ones or the first ones produced had Les Paul written on the truss rod cap and Les Paul got upset because he hated the look of the SG and then later Gibson removed it.

The tone of the SG is a more subtle Les Paul sound. You get that tight thick crunch from the mahogany wood and the less wood involved thins out the tone a little bit but not in a good or bad way,...just different way.

Another great tonal feature in this guitar is that you don't have to reach as hard for the upper fret register as you would with a Gibson Les Paul. trying to climb your way up to the 20th fret can be a bit difficult on a Les Paul, but not on the SG. You have more control of the fret board and the upper frets. The fret board seems a little more flat on top too. Just a different feel than a standard Gibson Les Paul.


The only reason I'm not a fan of this particular guitar is simply the color. I hate the color of the silverburst. A lot of guys like it because it is generally rare when you see it as an SG or a Gibson Les PAul and the dude form Tool plays silverburst so it has gotten popular in recent years.

I think Gibson only made about 400 of these guitars so getting one might be a little difficult. I have seen them on the used market for around $1500 or so.
Did you find this review helpful?yesno
»

Gibson [Guitar of the Week #3] SG Standard
4
In the early 60s Gibson was looking to lower production costs of the Les Paul. To do this they redesigned it to have a flat top and double cutaways. What we know now as the SG was introduced as the new Les Paul in 1961. Later on the real Les Paul was re-introduced and the new guitar was renamed the SG. The standard SG of today is exactly that, the standard SG. The guitar features the classic dual cutaway SG body with a 22 fret neck. It features dual humbucking pickups selected with a 3 way toggle switch and two tone and two volume knobs. For a long time the Silverburst finish was a really cool and rare finish and if you had a Silverburst guitar you had something special. Now that Gibson has caught on to this they have pretty much put out every model they have in Silverburst so it isnt that special anymore. It is still a cool looking finish anyways.

The SG was designed in such a way to give better fret access than the earlier Les Paul. The neck is not mounted as deep into the body as is with the Les Paul. This design gives it a few problems. The neck joint on SG models is very weak compared to Les Pauls or even bolt on guitars. This weak neck joint makes some SG's prone to going out of tune. With the neck mounted so far out on the body and the body being so thin and light, SG's are prone to neck dive. When playing an SG standing up you may find yourself holding up the neck due to this awkward balance between the neck and the body. This standard has the large pickguard that covers more of the body. Personally I prefer the smaller pickguard models so you can see more of the finish.

With their thinner flatter bodies SG's tend to have a tone slightly thinner than that of a Les Paul. Some people say it sounds more like a Gibson Flying V than a Les Paul. The smaller body also helps make the tone different than that of a Les Paul. Gibson pickups are mainly designed for classic rock. These pickups tend to offer a medium output. If you are looking to play heavier music you may want to replace the pickups with aftermarket higher output models. A set of EMG's in this guitar would make it sing. EMG's will provide much more clarity for high gain applications. Even a set of good Seymour Duncans will do better for heavier music than the Gibson pickups.

Gibson is answering peoples request to bring back the Silverburst finish and they have done it in a big way. Now you can get pretty much any Gibson model in Silverburst. This saturation now has taken some of the specialness off the finish. Even with many Silverburst models on the market they still look cool. If you are looking for a solid SG with a very cool classic finish the Silverburst Standard is a good choice.
Did you find this review helpful?yesno
»