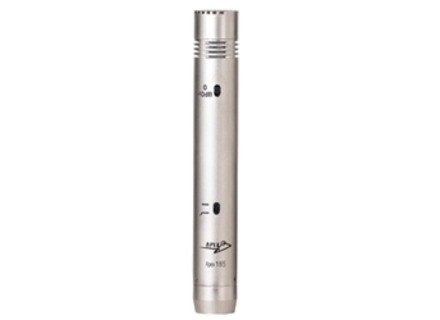 Product replaced by the Apex Electronics 185B.


9 user reviews
Find it in the classifieds starting at $65 Avg used price: $65

All user reviews for the Apex Electronics 185

Average Score:4.1( 4.1/5 based on 9 reviews )
Value For Money : Excellent
Not satisfied with those reviews?
Our members also liked:

Apex Electronics 185
5
The Apex 185 is a very slim condensor mic that has 2 switches that are actually on the mic itself. One of the switches is a - 10 decibel switch for recording some instruments that pack a sharp punch like some brass instruments and for like a snare drum. Because of these instruments immediate punch can cause mics to record well over 0 decibels which is a big no no. So with the -10 switch it will make a big difference for when you are recording these instruments. I have used several Apex 185 mics at the same time and have nothing negative to say about them. They have worked great for recording some of the groups and bands that come through my studio.

This mic is worth the money that it cost. It doesn’t even really cost that much so you can actually afford to get more than one which is well worth the investment to record. it’s a high quality instrument mic that is perfect for those brass and woodwinds and drum sounds. I don’t use it for anything else but instruments like those. Mainly instruments that can have a lot of accent points meaning start with a loud sound and then go down to low tones. Mainly for the instruments that are really dynamic as far as the loudness of them. This mic has worked so well for myself and my team we will continue to use it for many years to come. I think they have actually upgraded the mic now to a different more advanced version that can handle a little more and is more multi purpose , but since we have these there really is no reason for use to upgrade. The Apex 185 is one of the best instrument mics to have in your set up and we will keep using it.

Apex Electronics 185
4
The Apex 185 is a uniquely designed condenser microphone that has an omni polar pick up pattern. This is not only a unique microphone in terms of look and shape, but unique in that it will pick up signals up to 30 KHz and as low as 9 Hz. Most microphones will pick up sound between 20 Hz and 20 KHz because that is the range of human hearing, but the Apex 185 is kind of a high definition microphones because of the wide range of frequencies that it picks up. The slender look of the Apex 185 is extremely unique and it makes it possible to really 'zoom in' on the sweet spots of certain instruments.

I've been using the Apex 185 condenser mic and I have found it to be a great all purpose mic. This microphone is great for applications of all kinds, but I mostly use it to recording acoustic guitar, acoustic piano, and other acoustic stringed instruments like violin, mandolin, banjo, and cello. I find that since the frequency response on this microphone is so wide, it really picks up all the subtle sounds from these instruments. Everything comes in crisp and clean, and they also are great for picking up drum overheads. The price of these microphones isn't cheap, but if you are a professional looking for an all around great condenser microphone like this, it is probably worth the price. Earthworks has a unique line of microphones, and the Apex 185 is one of their most popular models. I find myself using these microphones a good deal when I want to pick up the most subtle sounds in acoustic instruments. While the price may make it a bit hard for the home studio owner to get, for professionals the Apex 185 is truly a great all purpose condenser mic. Great sound, great looking mic!

Marty49's review (This content has been automatically translated from French)

I use it for 3 years, I used to take the stage to the sound recording of plays and dissemination of sound in the background. It replaced an AT4041 which I rented.
I wanted a simple and accessible micro, not really but budget constraint technique.
For my use, it suits me perfectly.

I use it for 7 years, I have not tried other models as they were in the cheapest of their time, the price had decided.

Which is very pleasant in the microwave (which is also a major fault) is the small bump in the lower medium that allows for a microphone for this award, to have a real warmth to the sound of 'acoustic instruments (guitar, violin, brass ...), but the bump is very embarrassing for the sound of cymbals.
To overcome this defect, I use my couple XY above by putting the battery in addition to a Rode NT3, which allows for the precision of the stereo, and accuracy of a micro Rode, the couple give her a really nice and very realistic.

To summarize, the quality of its microphone is directly related to their prices, but pleasant surprises can seduce you if they are not using it in an overhead or on Hit-Hat.

Apex Electronics 185
3
I use it mostly on guitar or the taking of certain moods or even percussion
after all, depends on the desired report. the better to test recording.

I find this mic a little brighter than the P17 of AKG in the rendering of sound, so everything depends on the purpose of taking.
for small projects that I make this choice I would do
Did you find this review helpful?yesno

Malokoxis's review (This content has been automatically translated from French)

I used the studio as much as scne, but he took a few slaps!
Quite sensitive but difficult to use. Ncessite fantme a power supply.
A used for the taking of moods, acoustic guitar in the studio, charley.
But be careful, too much pressure!

alftheway's review (This content has been automatically translated from French)

Apex Electronics 185
5
Kit 2 matched condenser microphones each with its suspension, windscreen, an omni-directional capsule and a capsule cardoide
Each microphone has a switch for switching the high-pass filter (attnuation bass) and a switch to attnuation-10db.
To change the directivity of the microphone must dvisser and replace the cap.
Full equipment trs.

I bought the kit, 7 months ago.

This is my Premire pair of condenser microphones.
I use it for recording classical guitar and folk XY position and I also used to record voice with a US-122. I also used by BPS branch of a Roland AC60.
Before I used two SM58 taking now dusts.
Rendering on the guitar is much better than the SM58, the uptake of its sounds more natural.

Even if it is not normal use, rendering of a female voice is also convincing in cardoide, the sensitivity is really good. No need to turn up the gain of prampli, we may even capture its neighbors. The sensibilt to plausives is strong, the use of a pop filter is almost mandatory.
By changing the capsule to the omni-directional, the pair of microphone can be used in making room or choir (it nikel 1.5m).
The record is clear, clear with a pretty good DEFINITIONS on mdium and treble. It seems to me a cabbage attnuer serious, taking on a male voice, the diffrence is less with a dynamic brand.
BPS in a large pice, it can hang the same feedback ... without playing like nags. Be careful positioning but nothing rdibitoire.

If I re c'tait achter eyes closed.
The report qualitprix is ​​amazing. The two microphones 145 .. 77.50 is the mic ..
This is not the best micro earth but those who are fighting at least three times as much ... or more.
But I think buying another mic for voice.

Apex Electronics 185
5
See below or on site

- How would you rate the quality / price? it works very good, very good value so

- With experience, you do again this choice? ... yes

Days Away's review (This content has been automatically translated from French)

I've had four months (in fact I bought the kit with two matched microphones). Overhead test battery with a Shure SM 57 (119 euros) for the snare and a Sennheiser E 602 (190 euros) for the bass drum, I am fully satisfied with the rsultat. Tests also engaged in a stro Electroacoustic Takamine guitar, the sound is nickel.
CAUTION: Do they like any ncssitent condenser microphone phantom power.
Report qualitprix excellent (150 euros a pair in a suitcase with suspension, windscreens, two cardioid capsules and two capsules omnidiectionnelles).
I prcise the attention of the "pros" of the recording, I'm bassist for 15 years but I beginners in computer music. This is my first condenser microphones and pre-amp couplsa my m audio audiobuddy (119 euros), they did not. However, I am not able to compare them to other models.
If c'tait again, I would reiterate the same. May be in a few months I would see Different. But frankly for the price, this is a good choice s'avre and more versatile. A consultant dsireux anyone to make recordings of their group, looking for a pair of static and does not invest 5000 euros in their home studio, because the quality of rsultat will always be at the limit weakest link of the audio. To register a group (guitar, bass, keyboard, drums, vocals etc ... it takes tips and gadgets). So if we can not afford to take high-end all, be reasonable and look far to find a set cohrent according to their budget and what we intend to make.
In my case, I found my happiness with the addition of hardware dja cit above a console Yamaha MG 12 / 4 (199 euros), a box of microphones audio technica microphones kitpak of 4 toms (150 euros) and a sound card m audio delta 66 (179 euros). Total budget 1300 euros with microphone stands (4), cables xlr / xlr (8) and tie mics for toms (4). What make recordings more qu'honntes with my group.
I plan complter my home studio soon with a prampli lamps SM Pro Audio TB 202 and a MULTIGATE for a final budget of 1600 euros.