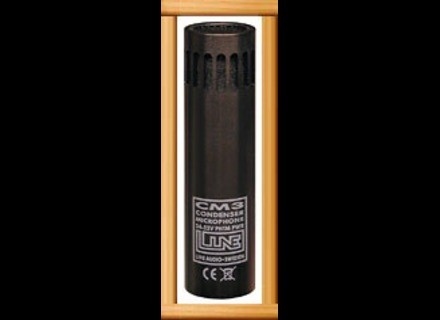 y.godeau's review (This content has been automatically translated from French)" small but tough."

I use it for three months, as in live recording, and it still delivers a pretty small stick (dynamite). I find it highly accurate in the rendering of cymbals, so the drummer is well transcribed.

However, despite its precision, there is still a bit cold at the sound.

But the quality / price ratio, it beats everyone, I have not found better.

This choice I would repeat without hesitation. (And I'm waiting to test other models of this brand micro)

XgrincheuxX's review (This content has been automatically translated from French)"Small, not bad, not expensive!"

Line Audio CM3
4
Micro Static Transistor Cardio.
See manufacturer (which is a small Swedish hand made according to legend)

This mic is tiny! who want the clip is almost as big as it. This gives a very practical side to place it anywhere and quickly!

I use it most of the time on my GTR Live!
So it sounds, well, even very very well!
very straight, with a low meduim pretty enough, not too sharp and aggressive!
The report gives the overall impression of the amp in full face, which is quite nice especially for the musicians on tour (I know mine really apreciated on their tours)
A small lack of dynamics, but I corrected it by coupling them with SM7.

I could test them also levied on toms is super nice too. a nice attack, was breathing, then it sounds anything.
same effect as good as with GTR, in your face!

It is just that it's months since I used (In general I find it too little to give an opinion!)


Like I said earlier, this microphone gives an impression of the face! which I think in some cases can be very unpleasant life!
cardiovascular side are not at all boring cardio is fast too!
it's more like an omni! for the former toms there are many cash repisse cymbal, drum finally what!
live AC is less of a problem, given the level that sends AC base, you really gain does not open, then there's just put it out and pass AC alone!

One last thing, I have one of two micro cracks that from time to time I put them on GTR playing too loud! Reliability!? too early to tell!

Globality in this are very good microphone, not very expensive! this place has that can be anywhere near.
I would do without hesitation that choice!

music007's review (This content has been automatically translated from French)" Surprising"

Line Audio CM3
5
They are tiny, they are condenser microphones.

I have received (a couple) 24 December 2008 in the morning with 2 racks of preamps of the same brand.
I have tried many models before &nbsp;... It is a Jazz sound engineer (Philippe Abadie) who 'told me about them...
They are small and discreet ...

I made comparisons taken:
Line Audio Design in microphone and line audio preamp design in a couple of flamenco guitar ...

I was in front of Josephson C42 with 2 Little Labs LMNOPre.
The Line Audio fared pretty well. We had the same bandwidth on the 2 couples, for the cons Line audio was a bit harder ...

I find them soooooo interesting ... so I'll buy more, but before all that, at Line audio, do not forget the microphone with 12 capsules. This one, as soon as I have 500 &euro; to put toward a mic, I will buy it directly!