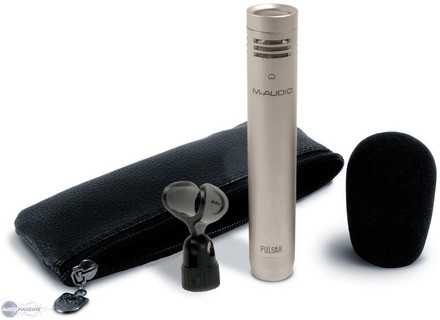 gyn's review (This content has been automatically translated from French)

it is a condenser microphone ....

H h I bought it for some time on a head shot, there are about three weeks, I possde a dj Luna of the same brand and I am relatively satisfied . Knowing the quality of the products m-audio j'me I said why not try it for my catch, guitar sche!

When I plugged in my console for the first time I could not m'empcher to talk a little inside, we feel it IMMEDIATE sagit not a micro 600 $ genre akg 451b, all fawn in dpart he did not t Designed for voice, but had to try even when a voice.

In front of my guitar Scheer (Ovation Matrix model 1137) is better, although there is a lack in the high frquences, so correction is needed (increase in the band 10 @ 16Khz) but not too much if we trsmtallique up with a sound, which is not natural at all!
It lacks personality is not warm, for torque against my m-audio luna it becomes a ready-made complment INTERESTED!

But we must keep all of the same objective, it is a micro-level of so ... do not expect to have any performance breaking at least for the sound of a guitar Scheer.

My test does have limits on a guitar and a sche only pulsar, maybe it could be better on other types of instruments such as wind

I'm not encouraged to acquire a second pulsar to make a pair, so my search for a pair xy is not finished! I think to try a pair of NT5 Akg 451B or more, but ... I am looking for the quality and versatility!

It is nothing more than its price!

- The finish ct Aesthetics (his only advantage! In my opinion)
- Affordable
- Comes with a nice little tui a windscreen, and a clamp

- Lack of DEFINITIONS
- The "Lo Mid" somewhat reassuring
- Could be sold in pairs only one that's ridiculous It must be coupled!
Did you find this review helpful?yesno
»