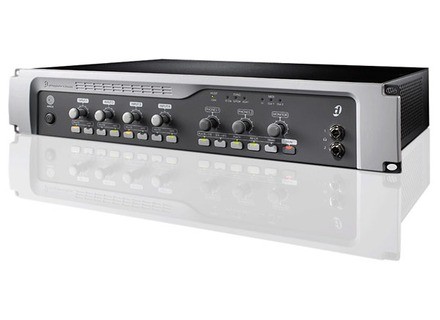 Digidesign 003 Factory Bundle
4
Digidesign is fairly well known throughout the community as being a great company to buy starter packages for beginning a studio from. This time, they offer everything the 002 pack had and then some. The 003 is a nice control surface that has 8 motorized faders, 8 rotary encoders for pan/send/meter and other controls, a dedicated mute/solo/select/record switch per channel, nifty LCD display per channel, jog wheel, firewire, 18 I/Os, decent mic pres, phantom power, S/PDIF and more. This also comes complete with Pro Tools LE to help get you started with everything you need.

Pro Tools LE has always been one of the more stable DAWs out there. It is fast, easy to use, intuitive and handles things pretty well. There are some issues that can occur when it comes to converting VSTs to RTAS, but that is more of an issue with the wrapper than the actual Pro Tools application itself. It also depends on how the VST was made and a bunch of other things. The 003 console is a pretty decent device, but I think it feels kinda cheap at times. I might be a bit too used to the higher end consoles, but considering the price, I guess it's not too terrible. I've only had a limited experience with this, so keep that in mind.

I'm not a huge fan of cheaper bundles with the lower end mixing consoles such as this. However, if you're in the need for something like this, it might not be too bad. Personally, I'd rather get a better pre and just use the DAW's own built-in environment for all of my mixing and console related applications. That said, the device itself is great, and Pro Tools is an awesome DAW that won't let you down if you do decide to drop the cash on this.
Did you find this review helpful?yesno
»

Digidesign 003 Factory Bundle
4
These plug-ins come installed with Pro Tools when you buy the Digi 003 interface. This bundle will be great in getting you started with Pro Tools. There aren't any compatibility issues, these get installed more or less immediately after installing Pro Tools, and they are up and running before you know it. I haven't read the manual for each of these plug-ins, but if you have any experience using effects or anything, it shouldn't take you long to figure them out. If not though, the Digirack plug-ins guide is available under "Help" in the Pro Tools menu. The functions of most of these plug-ins are pretty easily accessible, though you may want to consult the guide if you are unfamiliar with some of the terms used.

I've never had an issue with these. Since they come standard with the hardware, they are pretty barebones in general, so there isn't really a whole lot for the computer to process. Therefore, the performance is always stable with no exceptions. I've been using these for a few months now and I find that they have had no problems that I can think of.

While these things perform fantastically, the sound of the plug-ins themselves is a bit weak. While the EQs are easy to use for a novice, the don't react the same way a hardware EQ would, and thus, they might be tougher for someone who is used to outboard EQs. The reverbs are all pretty weak overall, while there is one (D-verb) that has some variety, none of the tones are that great and there isn't much in the way of controls, at least not compared to some of the other more advanced plug-ins. There's a decent selection of delay effects, highlighted by the Moogerfooger analog delay replica, but again, not a whole lot of variety in terms of tone.
That's basically the dilemma. If you want more advanced plug-ins, you have to pay for them. It's worth it. In the meantime, however, you can get started on demos and home projects with these, and you'll be more than capable of putting it out. If you're going for a more professional quality, though, I'd definitely go with some more advanced plug-ins. Don't let these plug-ins sway you from getting the 003 though, it's a great interface.
Did you find this review helpful?yesno
»