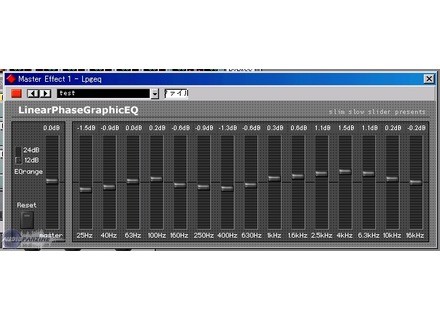 Slim Slow Slider LinearPhaseGraphicEQ [Freeware]
4
Slim Slow Slider’s Linear Phase Graphic EQ is a simple free piece of software to plug-in to your DAW. It’s compatible with both PC and Mac based operating systems, and is available in both VST and AU plug-in formats. You can download the plug-in for free in a few different places, and the whole process of installation should be pretty simple. I honestly don’t remember much about the whole process, but that probably means that I didn’t have any issues. It’s never a good thing if the installation process is noteworthy. As far as the interface goes, it’s a simple 15 band graphic equalizer, so there isn’t all that much to it. The frequency bands range from 25 Hz to 16 kHz, and also has a master output slider. You can also set the EQ range to either 24 db or 12 db, although I usually kept it at 12 db since EQing anything over that is usually overkill. Even if you aren’t all that experienced with equalizers, this is as simple as it gets, so a manual shouldn’t be necessary.

I’m not running this plug-in any longer, although I could if I wanted to. When I did run it, it was on a Hewlett Packard Pavilion dv8000 notebook computer consisting of a 3.0 Ghz processor and 2 GB of RAM. I ran the plug-in in Cubase SX 2.0 primarily, but also a bit in SX 3. I never encountered performance issues within this system with this plug-in, but I never really had a need to use more than one or two at a time. It wasn’t my go to equalizer, as I generally prefer to use parametric EQs.

Being that the Slim Slow Slider Linear Phase Graphic EQ is a free plug-in, for most people it’s going to be worth the hard drive space. You really don’t have much to lose by downloading it and trying it out for yourself. It isn’t the best sounding equalizer for sure, but it gets the job done fine if you’re just looking to do some simple EQing with one or two of the bands. Beyond that, I’d recommend using a different plug-in. There’s definitely no harm in trying it out if you’ve got a compatible system, but I don’t have a use for it in my current DAW.