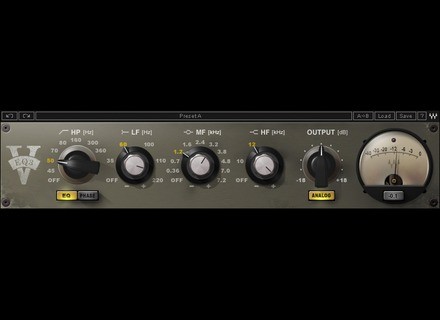 View all offers for Waves V-EQ 3 »

Waves V-EQ 3
4
I received the V-EQ3 as part of the V-Series Bundle, which actually came as part of the Gold Bundle. Installation was simple because I was able to install the entire Gold Bundle at once, and all the plug-ins were ready to go, including the V-EQ3. The plug-in can be purchased as a stand-alone processor. However, I would recommend getting the V-EQ4 to go along with the V-EQ3 because they complement each other really well.
Waves authorization in version 9 plug-ins does not require an iLok. Now any USB stick can be used as a dongle. Or, if you computer connects to the internet, you don't even need a dongle at all. You can just use the Waves Authorization application.
Waves included some decent presets with the V-EQ3. If you are not very familiar with equalization, you might want to at least check out their suggestions. I find that I actually don't need to use more than about 1 dB of boost/cut when I am using the V-EQ3.

I typically use the V-EQ3 on program signals (mix bus, drum bus, sub mixes, etc). For individual tracks, I think the V-EQ3 is better because it has more flexibility and more controls when I need to make more dramatic changes to an individual track. The V-EQ3 is better for program signals because the filter curves are very smooth. The high shelf is amazing for adding in the top-end 'air' on a mix without sounding harsh. Having the 'low-cut' or 'high-pass' filter is also great at the output. I almost always use the V-EQ3 on my mix bus and set the filter to the '45' frequency. This really helps clean up the low end of my mix, and makes sure any 'sub' frequencies aren't dominating my mix during the compression and limiting stage.
Supposedly, Waves modeled some of the 'analog' character (harmonics, color, saturation) in the V-Series plug-ins. I don't think it is very dramatic, especially compared to Waves NLS. The main analog thing I notice is that there is a noise floor based on 'noise' that Waves recorded from the hardware. This can be turned on and off.

The Waves V-EQ3 is an equalizer plug-in that models the Neve 1066 and 1073 modules. It has a high pass filter, a low shelf, a mid-range bell filter, and a high shelf. The original Neve hardware is known for having ultra smooth filter curves and for adding warmth to an input signal. The Waves modeled version resembles these characteristic, especially compared to other digital equalizers (Q10, Ren Eq, etc) that were meant to be super clean and capable of sharp filter resonances. I have never had the opportunity to use the real hardware, so I am can't make any comparisons between hardware and software. All I can say is that the V-EQ3 sounds different than a typical plug-in EQ, and in my opinion, it sounds better than a typical plug-in EQ.
Did you find this review helpful?yesno
»

Waves V-EQ 3
4
The mixture of vintage sound with the precision, reliability and response of digital stuff is always something that software engineers in the music industry are working to achieve. This is another vintage style EQ that Waves has made to help people get that vintage sound without having to buy the unreliable equipment. This is actually a clone of the 1066 and 1073 console EQs. It has a knob for different settings of the high pass filter, a knob for the LF shelf filter, MF bell filter knob, HF shelf filter, output knob, analog on/off switch and eq/phase switch. To enable this, simple call it up in your DAW on whatever buss you want to EQ. I tend to EQ first before doing anything. I never read the manual, but this is so simple that it's not needed.

Waves is really one of the best companies out there when it comes to implementing solid plugins with no real fuss. These plugins are always rock solid and super stable; this plugin is really no different. I've never experienced a single crash or hiccup while using this plugin. The plugin is also cross platform compatible, so Windows and OS X users alike can use these without any problems. There is one issue that I always gripe about, however. These plugins are 32 bit for OS X. Right now, I'm using a 64 bit DAW, and for me to utilize these plugins, it needs to launch a special bridge application. I'm not a huge fan of the way my DAW utilizes these, so I'm hoping they update these in the future. I've been using the Waves Mercury bundle for the past six or so months, and it's been a very enlightening experience to say the least.

This isn't exactly the most versatile EQ out there. It's more geared towards getting that vintage console EQ sound for those finishing touches more than anything else. It works fairly nicely, but I find myself just reaching for the default EQ whenever I want to EQ stuff. It's just easier for me to work with a paragraphic style EQ than working with these old school turn knob EQs as I was brought up in the digital age of recording. Good quality but not exactly something I'd use on a daily basis.
Did you find this review helpful?yesno
»

Waves V-EQ 3
5
The Waves Ltd. V-EQ 3 is a software parametric EQ that is available in a few different Waves bundles. It's primary bundle would have to be the V-Series bundle which also includes V-Comp and V-EQ 4. This is labeled as a 'Vintage" EQ and is modeled after the Neve 1066 and 1073 plug and pull EQ's. As far as the interface is concerned, it's easy to use regardless of if you've got experience using vintage equalizers like the Neves this is derived from. However, if you have ever used a 1073 you'll be in luck as this is virtually a direct copy. It's got four bands - a high pass filter, a low frequency band, a mid frequency band, and a high filter. It also has a output leveler and EQ and phase buttons just like a real Neve would. The frequencies chosen on here aren't the same exact as a Neve 1073, but it's pretty darn close and it seem like they've just added a few to the mid band. If you're feeling lost while using this, I'd suggest brushing up on your EQ notes rather than go looking in the manual...

The system that I'm running the Waves Ltd. V-EQ 3 at home on is Pro Tools 9 based, which I run with a Digi 002R audio interface. I've got a Mac Book Pro lap top consisting of 4 GB of RAM and a 2.2 Ghz Intel Core 2 Duo processor, which has been enough for me to run this plug-in comfortably. We've also got it running on the systems at the studio where I work, so I've also ran it within a Pro Tools HD system for some comparison as well. I've recently been using this plug-in more heavily within sessions than I had been and my home system has been able to handle this increase rather well. It definitely takes a sturdy system to run Waves plug-ins in general, but as long as you're comfortably running your DAW and some plug-ins right now, you should be all set with this one.

The Waves Ltd. V-EQ 3 is one of, if not my favorite plug-in EQ that is modeled after some sort of Neve EQ. Waves has really done an outstanding job here of giving you a warm and full sounding EQ in the box. Of course I'll always use the real thing on the Neve 8068 console that we have at the studio, but when I'm at home these come in really handy for EQing in any situations. I wouldn't say that it's going to get you that 'Neve' sound as some will suggest, but it's definitely one of the best emulators that I've heard in a plug-in. This is definitely a plug-in worth getting inside of a bundle for this plug-in alone, although I'm not sure if you can buy it individually as well. This EQ is on another level when compared to most EQ's, so if you're a professional working inside the box a good deal, the V-EQ 3 is really a must have...
Did you find this review helpful?yesno
»